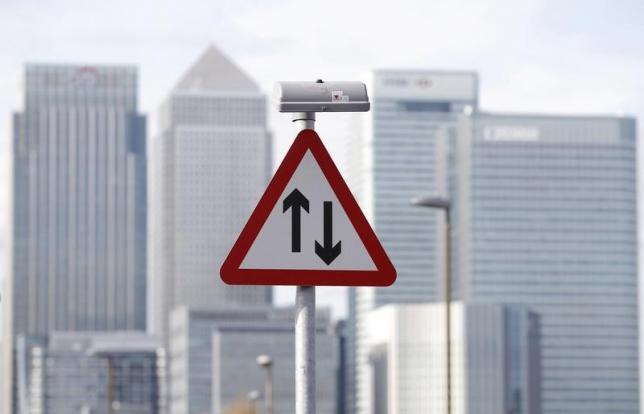 LONDON - Britain's economy is likely to grow slower than previously expected this year and next, after posting the fastest expansion among major advanced economies last year, a think tank predicted on Wednesday. Gross domestic product should expand by 2.4 percent in 2015 and 2.3 percent in 2016, down slightly from August forecasts of 2.5 percent growth this year and 2.4 percent growth in 2016, the National Institute of Economic and Social Research said. NIESR's forecasts are a shade weaker than those of economists polled by Reuters last month, while a more recent poll shows that investors expect the Bank of England to trim its growth forecasts too when it publishes new ones on Thursday. "Domestic demand will continue to be the main driver of growth this year and next as households take advantage of purchasing power improvements from the low inflationary environment and firms continue to invest," NIESR said. NIESR said growth remained solid and that it still expected the BoE to raise rates for the first time since 2007 in the first quarter of next year. But it saw an increased chance of the rate rise being delayed until in the second quarter -- in line with a recent Reuters poll where economists delayed their rate hike bets to that same period. After that, rates were likely to rise by just half a percentage point a year, reaching 2 percent by 2018. Britons are currently benefiting from zero inflation, low interest rates and a pick-up in wage growth, after they saw their disposable incomes dwindle during the financial crisis. British economic growth slowed more than economists had expected to 0.5 percent in the three months to September, against a backdrop of financial market turmoil in China and a sharp fall in construction. But NIESR said the slowdown was "temporary" and that the economy would rebound in the fourth quarter -- a view supported by a manufacturing survey this week which showed factory activity hitting a 16-month high in October. NIESR said it expected inflation to average close to zero for 2015 as a whole, before rising to 1.1 percent in 2016. -Reuters