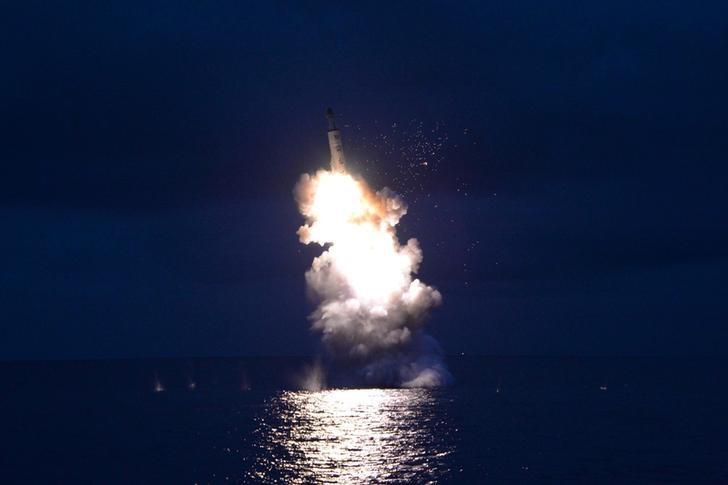 SEOUL - The UN Security Council condemned a series of missile launches by North Korea after failing to do so earlier this month when China had wanted a statement also to oppose the planned deployment of a US anti-missile system in South Korea. North Korea test-fired a submarine-launched ballistic missile on Wednesday which flew about 500 km (300 miles) in the direction of Japan, the latest in a series of launches by the isolated nation in defiance of UN resolutions. "The members of the Security Council deplore all Democratic People's Republic of Korea ballistic missile activities," the statement said, referring to North Korea by its formal name. The statement referred to Wednesday's launch as well as other North Korean ballistic missile launches since July 9. "Such activities contribute to the Democratic People's Republic of Korea's development of nuclear weapons delivery systems and increase tension," it said. As in past statements, the Council went on to say that it "would continue to closely monitor the situation and take further significant measures in line with the Council's previously expressed determination." Earlier this month, the 15-member council had been unable to agree on a US-drafted statement to condemn North Korea's Aug. 3 launch of a ballistic missile that landed in or near Japanese-controlled waters. China had wanted the statement to oppose deploying "any new anti-ballistic missile stronghold in Northeast Asia with an excuse of dealing with threats of the DPRK nuclear and missile programs." Friday's statement did not include such language. China strongly opposes the planned basing of a US Terminal High Altitude Area Defense (THAAD) anti-missile system in South Korea, which it says would worsen tension on the Korean peninsula. Beijing worries that THAAD's radar system has a range that could extend into China. The United States says the system is defensive and intended to counter North Korea's missile threat. North Korea has been under UN sanctions since 2006. In March, the Security Council imposed harsh new sanctions in response to North Korea's fourth nuclear test in January and the launch of a long-range rocket in February. -Reuters