Unbeatable Bolt signs off with triple-triple


RIO DE JANEIRO – Usain Bolt drew down the curtain on his brilliant Olympic career by securing a sweep of the sprint titles for a third successive Games when Jamaica successfully defended the 4×100 meters relay crown in Rio on Friday.

Two days shy of his 30th birthday, Bolt anchored his country to victory in 37.27 seconds so adding the relay crown to the 100 and 200 meters titles he has owned since exploding onto the Olympic stage in Beijing in 2008.

He will depart that stage never having tasted defeat in a final, his nine gold medals a joint record in athletics with Finnish distance runner Paavo Nurmi and American sprinter and long jumper Carl Lewis. 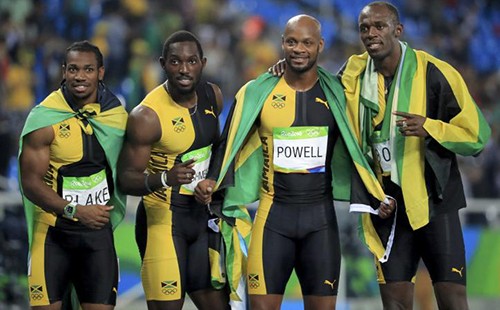 In the eight years since Beijing, the 11-times world champion has become one of the best known sportsmen on the planet and with the ‘triple-triple’ has a legitimate claim to the title of greatest Olympic track and field athlete ever.

There has never been any doubt in the Jamaican’s own mind.

“There you go, I am the greatest. I’ve worked hard every Olympics to win three gold medals… so I’m just happy that I’ve accomplished so much,” Bolt told reporters.

“It’s a relief but I’m also sad that I have to leave. This is my last one… It’s just so many special feelings I’m feeling.”

There is no doubt that Bolt has transformed his sport, if only by almost single-handedly displacing the United States as the superpower of men’s sprinting.

It was only almost single-handedly, though, as his three Olympic relay titles, two in world record times, always required the input of his fellow Jamaican speedsters. 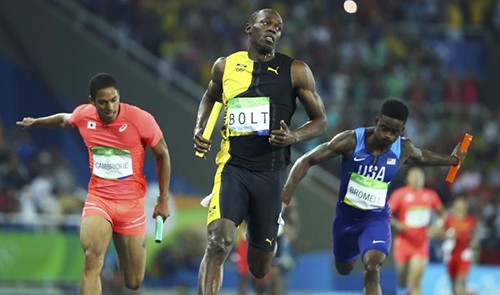 That was always going to be enough for Bolt in his final Olympic race, however, and he powered down the straight to finish five meters clear of Japan’s Aska Cambridge.

“And they did exactly that, I had no work to do, just to run to the line.”

Ryoto Yamagata had run a blistering opening leg for Japan, who won a stunning silver for their first Olympic medal in the sprint relay in 37.60, improving the Asian record they set in qualifying.

Trayvon Bromell’s dip for the line was so aggressive that he tumbled over but the United States still thought they were settling for bronze in 37.62.

Since 1995, though, the Americans had failed to get the baton around or been disqualified eight times in sprint relays at the Olympics or world championships and calamity struck for a ninth time on Friday.

The handover between lead-off runner Mike Rodgers and Justin Gatlin was adjudged to have started before the exchange zone and the Americans were disqualified as they were on their lap of honor. 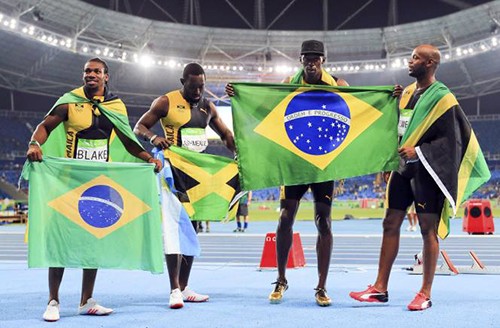 “It was the twilight zone,” said Gatlin. “It was a nightmare. You work so hard with your team mates, guys you compete against almost all year long. All that hard work just crumbles.”

Canada were elevated to bronze after their run of 37.64, a national record which gave Andre de Grasse his third medal of the Games after a bronze in the 100m and silver in the 200m.

De Grasse is considered one of the men most likely to step into the huge void left by Bolt when he retires after next year’s world championships in London.

“I’m definitely going to miss the crowd and the energy and just the competition,” Bolt said. “I love competing. So I’m going to miss all of that. But it’s been a great career, I’ve done great, I’m just happy with myself.”

American Tyson Gay was the last man to beat Bolt in a major championship final – in the 200 meters at the 2007 worlds in Osaka – and, like many of the other sprinters in the final, he had nothing but praise for the Jamaican.

“He’s a great sprinter,” Gay said. “That’s just self-explanatory. Words can’t describe that type of a guy and what he’s done for the sport. Everybody just appreciates what he’s done.” –Reuters