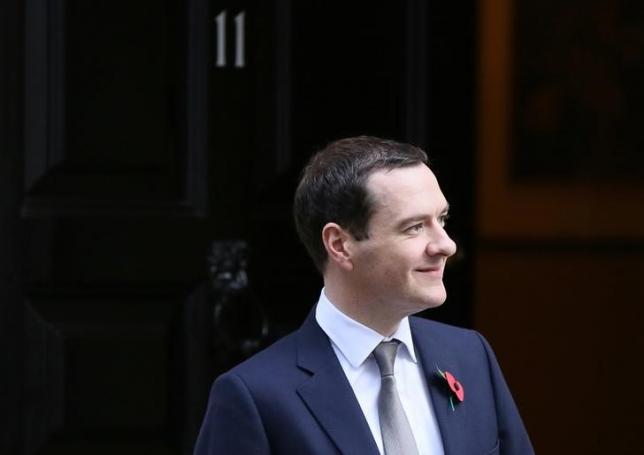 LONDON - Chancellor of the Exchequer George Osborne will spell out on Monday the first set of spending cuts to be imposed on government departments as part of an overall 37 billion-pound ($56 billion) austerity plan to turn Britain's deficit into a surplus by 2020. Osborne, seen as the frontrunner to succeed Prime Minister David Cameron, is seeking to shore up his credentials as a safe pair of hands on the economy after an embarrassing parliamentary defeat over welfare cuts last month. Britain's transport, environment, local government and finance departments will have their day-to-day budgets, excluding capital expenditure, cut by an average of 8 percent a year over the next four years, Osborne will announce, according to advance extracts of the speech. Since 2010, Osborne has overseen the return of growth to the British economy, but opponents accuse him of crimping the recovery by focusing on cutting spending and of failing to meet his original target to eliminate the deficit by 2015. In his speech on Monday, Osborne will hit back at those critics, adopting an unapologetic stance over spending cuts and restating his view that Britain should be running a surplus. "If our country doesn’t bring the deficit down, the deficit could bring our country down," he will say. "That’s why, for the economic security of every family in Britain, the worst thing we could do now as a country is lose our nerve." The cuts will be confirmed in a Nov. 25 spending review which sets out a total of 20 billion pounds of reductions in spending by government departments by 2020. Targeting a 10 billion-pound surplus by 2020, Osborne also wants to save 12 billion pounds on welfare spending and recoup 5 billion by reducing tax avoidance. The Treasury did not place a specific value on the cuts being announced, but they were expected to amount to billions of pounds. The four departments account for around 22.5 billion of the current 337 billion day-to-day budget. Large areas of spending on health, education and defence are protected from cuts, increasing the impact on other areas. Osborne aims to cut the budget deficit this year to 69.5 billion pounds, or 3.7 percent of gross domestic product - down from 4.9 percent of GDP in the 2014/15 financial year but still one of the highest among advanced economies. -Reuters