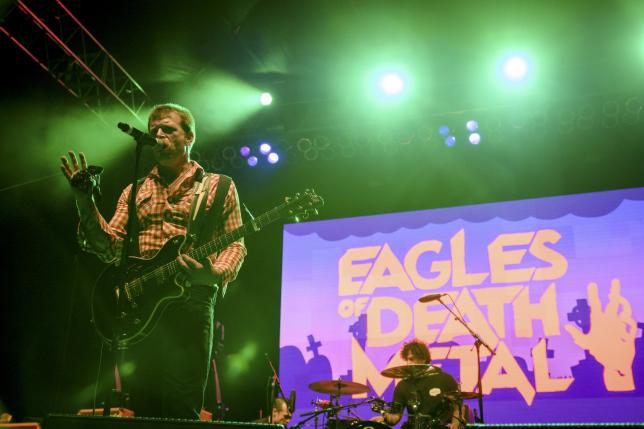 PARIS - All the musicians performing with the California-based rock band Eagles of Death Metal emerged unharmed from the lethal terror attack inside a Paris concert hall, but a member of their entourage was killed in the violence, relatives said. The band's merchandise manager, a 36-year-old Briton named Nick Alexander, was identified in a statement from his family as one of at least 89 people who died when gunmen stormed the Bataclan music hall in the midst of Friday night's show. "Nick died doing the job he loves and we take great comfort in knowing how much he was cherished by his friends around the world," the family said. Alexander had worked the merchandise table for a number of bands touring Europe, including the Black Keys and the Disco, Rolling Stone magazine said. Also among those killed was a Mercury Records executive, Thomas Ayad, 34, part of a team from the band's parent label, Universal Music Group, attending the concert, the company said. The French news agency Agence France-Presse reported on Saturday that Eagles of Death Metal has decided to cut short its European tour and return home, quoting an unnamed official for the concert promoter Nous Productions. But there was no official word from the band on the status of the remaining 21 stops on its tour, which had been slated to end on Dec. 10 in Lisbon, Portugal. The Bataclan was one of several sites around Paris targeted by gunmen and bombers on Friday in what French authorities have said was a coordinated assault that left at least 129 dead overall. Islamic State on Saturday claimed responsibility for the attacks. Eagles of Death Metal were onstage performing when the attack at the Bataclan began. The group, which also goes by the acronym EODM, was formed in the late 1990s in the California city of Palm Desert by lifelong friends Jesse Hughes and Josh Homme, the group's only two permanent members. Hughes' mother told Reuters Friday night her son was "very upset and shaken," though unhurt, and that she understood that the rest of band were also safe. Homme was not on the group's European tour. Wayne Tong, father-in-law of guitarist Matt McJunkins, said his son-in-law was in protective custody afterward giving a statement to police while his passport was being cleared. "He was one of the last ones to be found and released," Tong told Reuters in a telephone interview from Oregon. Tong said the account was related to him by his daughter, McJunkins' wife. Tong said he was told that no member of the band was hurt. Guitarist-vocalist Eden Galindo was reportedly safe, according to a Facebook post Friday night by an associate. Other media reported that drummer Julian Dorio was also unharmed. According to band lore, the group took its name from Homme's joking description of the Polish band Vader as "the Eagles of Death Metal," a reference he and Hughes ultimately adopted for their own musical collaboration that critics say is more in keeping with garage band rock than death metal rock. A Paris concert scheduled for Saturday night by Irish band U2 was canceled due to the state of emergency across France, and the American rock band Foo Fighters canceled the rest of its European tour on Saturday. Foo Fighters founder Dave Grohl has played with Eagles of Death Metal. It was not immediately clear when EODM's members would return to California or whether they might resume their tour. The band released its fourth album, "Zipper Down," in October. The American band Deftones, which also had been scheduled to play at the Bataclan in the coming days, was reported by several news outlets to have decided to return to the United States. -Reuters