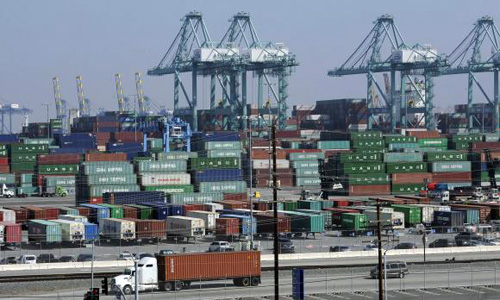 WASHINGTON (Reuters) - US economic growth braked more sharply than initially thought in the fourth quarter amid a moderate increase in business inventories and a wider trade deficit, but strong domestic demand brightened the outlook. Gross domestic product expanded at a 2.2 percent annual pace, revised down from the 2.6 percent pace estimated last month, the Commerce Department said on Friday. The economy grew at a 5 percent rate in the third quarter. Growth is poised to pick up in the first quarter now that the threat of an inventory overhang has diminished. However, an exceptionally cold and snowy February, as well as reductions in oil and gas drilling, could limit the pace of expansion. "The composition of growth is looking much better, we are setting up for a solid quarter for the economy. The first quarter is still work in progress," said Ryan Sweet, a senior economist at Moody's Analytics in West Chester, Pennsylvania. Businesses accumulated $88.4 billion worth of inventory in the fourth quarter, far less than the $113.1 billion the government had estimated last month. That resulted in the GDP growth contribution from inventories being cut to one-tenth of a percentage point from 0.8 percentage point previously. The moderate stock accumulation came as consumer spending grew at its quickest pace since early 2006. With households bullish about the economy's prospects, thanks to a tightening labor market and lower gasoline prices, consumer spending is likely to remain at lofty levels this year. A second report showed the University of Michigan's final February reading on the overall index on consumer sentiment was 95.4, higher than the initial reading of 93.6. While that was a retreat from January's reading of 98.1, it was the second highest level since January 2007. "A more confident consumer is likely to spend more on big ticket items and other discretionary items, and looking ahead, we expect consumer spending ... to outpace 2014," said Kristin Reynolds, an economist at IHS Global Insight in Lexington, Massachusetts. First-quarter growth estimates currently range between a rate of 2.4 percent and 3 percent. US stocks were little changed, while prices for US government debt rose. The dollar was flat against a basket of currencies. ROBUST CONSUMER SPENDING Growth in consumer spending, which accounts for more than two-thirds of US economic activity, was revised down by one-tenth of a percentage point to a 4.2 percent pace in the fourth quarter, still the fastest since the first quarter of 2006. In another positive for the economy, business investment was not as weak as previously reported, with spending on equipment revised to show it rising at a 0.9 percent rate instead of the previously reported 1.9 percent contraction. Growth in spending on intellectual products was the strongest since early 2000. All signs point to an acceleration in business investment in the first quarter, with data on Thursday showing a rebound in spending intentions in January after four straight months of declines. But lower oil prices have caused a drop in drilling and exploration activity. The impact is yet to be felt in the data. Another report on Friday showed factory activity in the Midwest in February plunged to its lowest level since July 2009. Activity was likely dampened by bad weather and a long-running labor dispute at West Coast ports, which has since been resolved. The Commerce Department data showed a key measure of domestic demand was revised to a 3.2 percent pace for the fourth quarter from the previous 2.8 percent rate. It was the third straight quarter of growth above a 3 percent rate. Strong domestic demand sucked in more imports than previously reported in the fourth quarter, resulting in a trade deficit, which subtracted 1.15 percentage points from GDP growth instead of the previously reported 1.02 percentage point drag. Despite the strong consumption, inflation pressures were muted, with the personal consumption expenditures price index falling at a 0.4 percent rate - the weakest reading since early 2009. The PCE index was previously reported to have declined at a 0.5 percent pace. Excluding food and energy, prices rose at an unrevised 1.1 percent pace, the slowest since the second quarter of 2013. The low inflation environment suggests little urgency for the Federal Reserve to start raising interest rates from near zero, where they have been since December 2008. Residential construction spending in the fourth quarter was revised down, while government spending was not as weak as previously reported. Strong job gains are expected to lift housing this year. A third report on Friday from the National Association of Realtors showed contracts to purchase previously owned homes rose 1.7 percent in January to their highest level in 1-1/2 years.