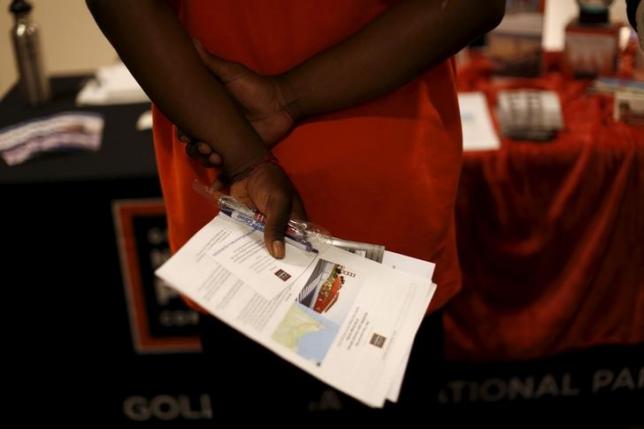 WASHINGTON – US job growth likely accelerated in October after two straight months of tepid gains, with wages also picking up in a show of domestic strength that would bolster prospects for a December interest rate hike from the Federal Reserve. A Reuters survey forecast nonfarm payrolls increasing 180,000, well above the 139,000 jobs per month average for August and September. Should payroll gains meet expectations, it would add to robust automobile sales in painting an upbeat picture of the economy at the start of the fourth quarter. With speeches from several Fed officials, including Chair Janet Yellen, suggesting a low bar for a December rate increase, economists say job gains above 150,000 in October and November would be sufficient for the central bank to lift benchmark overnight borrowing costs from near zero. Minutes from the Fed's Oct. 27-28 meeting and subsequent comments from Yellen have firmly put a rate hike on the table at the central bank's upcoming Dec. 15-16 gathering. "It's not great job growth but it's respectable and will qualify as good enough for the Fed to feel comfortable to raise rates," said David Donabedian, chief investment officer at Atlantic Trust Private Wealth Management in Washington. The Labor Department's closely watched jobs report will be released on Friday at 8:30 a.m. It will likely join October's strong services sector and auto sales data in supporting views that economic growth will regain momentum in the fourth quarter after braking sharply to a 1.5 percent annual pace the July-September period. Wages, which have been almost stagnant despite a tightening labor market, are forecast rising 0.2 percent in October after holding steady in September. Even with the expected gain, the year-on-year reading would bump up to only 2.3 percent, a still-tepid pace that threatens little inflation pressure. The unemployment rate is expected to have held steady at a more than seven-year low of 5.1 percent, just a touch above the level many Fed officials see as consistent with full employment. REVISIONS EYED Economists also expect payroll gains for August and September will be revised higher as the sharp slowdown evidenced in prior reports was not supported by other labor market indicators, such as weekly claims for jobless benefits, which are near 42-year lows. "The report will continue this pattern of an economy which is growing at a steady pace, but clearly with a labor market that is tightening," said David Kelly, chief global strategist at JPMorgan Asset Management in New York. Economists anticipate some improvement in other labor market measures that Fed officials are eyeing as they contemplate raising rates for the first time since 2006. But the labor force participation rate, or the share of working-age Americans who are employed or at least looking for a job, likely held at a near 38-year low of 62.4 percent. Employment gains in October were likely broad-based, though manufacturing and mining probably lost more jobs. Manufacturing has been hit by a strong dollar, efforts by businesses to reduce bloated inventory and spending cuts by energy companies cutting back on well drilling and exploration in response to lower oil prices. Mining employment has already declined by 102,000 since reaching a peak in December 2014. Oilfield services provider Schlumberger (SLB.N) last month announced further layoffs in addition to the 20,000 jobs it has already eliminated. Construction payrolls, however, are expected to have increased further, although the gains likely remained modest. Strong job gains are expected in the services sector, especially in retail, health and leisure. Government payrolls are expected to have increased by 15,000 last month. –Reuters