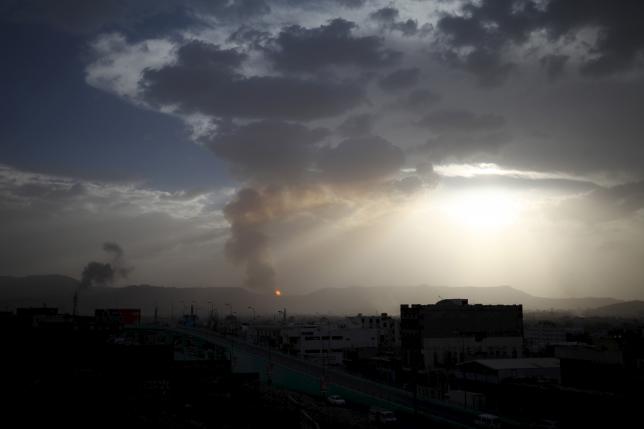 RIYADH/ADEN - The United States is speeding up arms supplies and bolstering intelligence sharing with a Saudi-led alliance bombing a militia aligned with Iran in neighboring Yemen, a senior US diplomat said on Tuesday. US Deputy Secretary of State Antony Blinken said the US, a key ally of oil-rich Saudi Arabia, had also set up a coordination center in the Sunni Muslim kingdom, whose forces have led an air campaign against the Shi'ite Houthi group which rules most of Yemen. "Saudi Arabia is sending a strong message to the Houthis and their allies that they cannot overrun Yemen by force," he told reporters in the Saudi capital Riyadh. "As part of that effort, we have expedited weapons deliveries, we have increased our intelligence sharing, and we have established a joint coordination planning cell in the Saudi operation center," Blinken added. Iran's Supreme Leader Ayatollah Ali Khamenei said on Tuesday that his country opposed the coalition's 13-day air assault. "Our view is that the solution for the crisis in Yemen is to stop the attacks and foreign interference against the people of this country," Khamenei was quoted as saying by Iran's state TV. "It's the Yemenis who need to make the decisions about the future of their country," he added. Exploiting Yemen's collapsed central authority, al Qaeda militants reportedly made gains on Tuesday, as gunmen believed to be from the group stormed a remote Yemeni border post with Saudi Arabia on Tuesday. Sources in Yemen's eastern province of Hadramawt said the gunmen took over the desert base near Manwakh, about 440 km (270 miles) northeast of the capital Sanaa, killing at least two soldiers including the senior border guard officer. The attack happened less than a week after al Qaeda gunmen attacked the Arabian Sea port of Mukalla, in a sign that Yemen's weakened army is failing to secure broad swathes of the country. HEAVY FIGHTING The Saudi-led campaign has failed stop the Houthis and allied soldiers loyal to former president Ali Abdullah Saleh from pushing into the heart of Aden and up to the perimeter of its main port. Saudi-backed President Abd-Rabbu Mansour Hadi was forced to flee Aden late last month. But the air strikes -- and three airdrops of weapons -- have helped fighters push back the Houthis and their allies from some of their positions in the southern provinces around Aden, and to disrupt Houthi supply lines.Witnesses said on Monday some Houthi fighters pulled out of an air base at al-Anad which had hosted US personnel fighting a covert drone war with al Qaeda in the Arabian Peninsula (AQAP), the powerful regional wing of the jihadist movement. But their army allies remained in the base, 50 km (30 miles) north of Aden, on Tuesday. Witnesses and southern militia sources reported sustained fighting in the southern town of Lawdar. Six southern fighters were killed, they said, but the Houthis also suffered heavy losses and around 50 of them were taken prisoner. The southern newspaper Aden al-Ghad reported that a warplane from the Saudi-led coalition mistakenly bombed a group of tanks under the control of southern fighters. It did not say whether there were casualties. Further north, the Saudi-led campaign has continued to hit Houthi targets on the Red Sea coast near the port of Hodaida, in the mountainous northern provinces which form the Houthi heartlands on the border with Saudi Arabia, and around Sanaa. A website of the Houthi-run defense ministry said on Tuesday two students were killed when a bomb hit a military base next to their school near the central city of Ibb. The conflict has further destabilized Yemen, which was already facing upheaval after Saleh was forced to step down following protests in 2011 inspired by wider Arab uprisings. WAITING FOR AID Fighting across hundreds of miles in the south and east of Yemen, along with the closure of airports and sea trade by the coalition, are pushing the country toward a humanitarian disaster, the United Nations says. The UN said on Tuesday at least 549 people had been killed in Yemen's fighting, including 74 children. Urgent Red Cross and UN shipments of medical aid and sanitation equipment have been delayed while the organizations seek clearance from the Saudi-led coalition. Aid groups have also struggled to find planes ready to fly into Yemen, but the International Committee of the Red Cross now says it hopes the first of two planes carrying a total of 48 tonnes of medical equipment will arrive in Sanaa on Wednesday. Residents in the beleaguered southern city of Aden say water has been cut off for over a week in some districts, hospitals are running low of supplies and fresh food is scarce as street battles tear through neighborhoods and dozens of buildings have been burnt amid heavy shelling. - Reuters