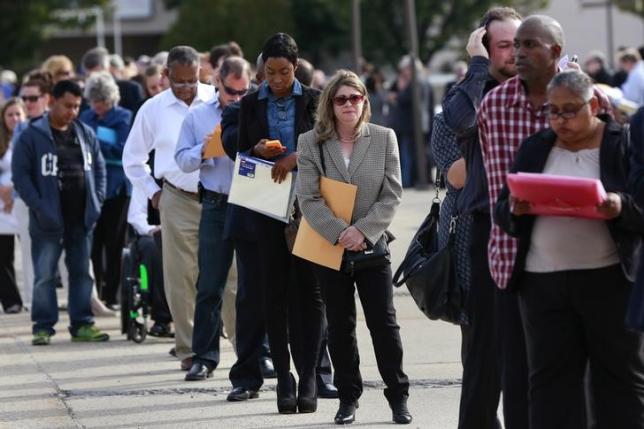 NEW YORK – New US applications for unemployment benefits last week recorded their largest increase in eight months, but remained at levels consistent with a fairly healthy labor market. Other data on Thursday showed a surprise gain in productivity in the third quarter after a drop in self-employment contributed to overall hours worked falling for the first time in six years, restraining labor-related production costs. Initial claims for state unemployment benefits rose 16,000 to a seasonally adjusted 276,000 for the week ended Oct.31, the Labor Department said. It was the largest weekly increase since late February. Claims had hovered near 42-year lows for much of October. The prior week's claims were unrevised. Still, last week marked the 35th straight week that claims were below the 300,000 threshold, which is normally associated with a strong jobs market. The four-week moving average of claims, considered a better measure of labor market trends as it strips out week-to-week volatility, rose 3,500 to 262,750 last week. The dollar briefly fell to session lows against the euro after the data, while prices for U.S. Treasuries pared losses. Last week's claims report has no bearing on the October employment report due for release on Friday. New applications for jobless benefits were low last month relative to September. According to a Reuters survey of economists, nonfarm payrolls increased 180,000 in October, well above the average gain of 139,000 jobs for August and September. The unemployment rate is forecast at 5.1 percent. The claims report showed the number of people still receiving benefits after an initial week of aid increased 17,000 to 2.16 million in the week ended Oct. 24. The four-week moving average of continuing claims fell 11,500 to 2.16 million, the lowest level since November 2000. The trend in continuing claims suggests more long-term unemployed are finding work. PRODUCTIVITY INCREASES In a second report, the Labor Department said productivity, which measures hourly output per worker, increased at a 1.6 percent annual rate after increasing at an upwardly revised 3.5 percent rate in the second quarter. Manufacturing productivity increased at its fastest pace in four years, led by the durable goods sector. Economists had expected productivity to fall at a 0.2 percent rate last quarter after expanding at a previously reported 3.3 percent pace in the second quarter. Despite the surprise rise in the third quarter, the trend in productivity remained weak. Productivity increased only 0.4 percent compared to the third quarter of 2014. Economists blame softer productivity on lack of investment, which they say has led to an unprecedented decline in capital intensity. While weak productivity has boosted employment growth as companies hired more workers to increase output, economists say it has contributed to stagnant wages and lowered the economy's speed limit. Economists say persistently anemic productivity could continue to limit wage growth even as the labor market approaches full employment. In the third quarter, hours worked declined at a 0.5 percent rate, the first decline since the third quarter of 2009. That reflected a drop in part-time employment as well as adjustments to hours for nonprofit and government enterprise workers. Unit labor costs, the price of labor per single unit of output, increased at a 1.4 percent rate in the third quarter. They had dropped at revised 1.8 percent rate in the second quarter, which was previously reported as a 1.4 percent pace of decline. Unit labor costs rose 2.0 percent compared to the third quarter of 2014. –Reuters