US likely to delay planned closure of two Afghanistan bases 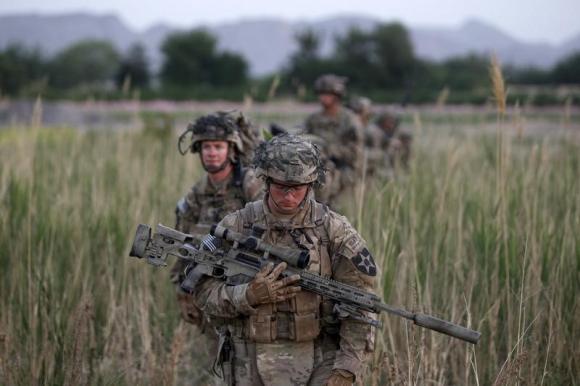 US likely to delay planned closure of two Afghanistan bases

WASHINGTON - The US military bases in Kandahar and Jalalabad are likely to remain open beyond the end of 2015, a senior US official said, as Washington considers slowing its military pull-out from Afghanistan to help the new government fight the Taliban. The anticipated policy reversal reflects the US embrace of Afghanistan's new and more cooperative president, Ashraf Ghani, and a desire to avoid the kind of collapse of local security forces that occurred in Iraq after the US pull-out there. It coincides with new efforts backed by Pakistan and China for peace talks between the Afghan government and the Taliban. Washington has welcomed greater engagement byChina, which has helped create a diplomatic opening for reconciliation. The US official said conditions had changed since May when President Barack Obamadeclared that by the end of 2015 the US force would be roughly halved from the current total of about 10,000 and would operate only from bases in Kabul and Bagram. The White House had no immediate comment on the possibility of maintaining the Kandahar and Jalalabad bases into next year. Obama is expected to decide in the next few days whether to slow the pace of the US troop withdrawal, possibly by next week when Ghani and Afghan Chief Executive Abdullah Abdullah travel to Washington. US officials hope the visit will garner American public support for a longer military mission and display a contrast to their prickly dealings with former president Hamid Karzai. Ghani is getting a warm welcome. He meets the secretaries of state, defense and treasury at the Camp David presidential retreat on Monday, lunches with Obama at the White House on Tuesday, and speaks to a joint session of Congress on Wednesday. SLOWING THE US WITHDRAWAL US officials expect him to pay tribute to the sacrifices made by US troops in more than 13 years of war in Afghanistan as well as to make his case for slowing the drawdown. Ghani wants Obama to reconsider his timetable to withdraw US forces from Afghanistan, making his case in the media as well as in private with US officials. "Being responsive to President Ghani's request for flexibility is an important part of the visit," said a senior administration official on condition of anonymity, adding that when Ghani flew home "I don't think he'll feel empty-handed." The US strategy in Afghanistan hinges on the ability of Afghan forces to secure the country despite a resilient Taliban insurgency and the Obama administration has signaled it is willing to consider adjusting its withdrawal plans. US officials said the White House is focused on how much Obama might slow the planned withdrawal of most US troops over the next two years and that there was no discussion, for now, of changing the US presence beyond that currently planned in 2017. Obama said last May the US military would draw down to a "normal embassy presence" with security assistance by the end of 2016. What constitutes a "normal embassy presence" is ambiguous, giving the president some leeway on the footprint after 2017. "No one's really talking about anything beyond 2016. Most of the discussion has been about the slope of the curve over the course of 2015 and 2016 to be able to kind of optimize the chances of success" for Ghani, said a second US official. This official said that Washington had gently urged Ghani not to ask for too much, meaning for a significant extension of the US military mission beyond 2016. The first senior administration official, however, suggested that the US military might maintain an aerial capacity beyond 2017, a possibility that could allow it to conduct air strikes, rescue Afghan forces under threat and evacuate their wounded. CRUCIAL BASES The two bases are crucial to the Pentagon because the US military uses them to train, advise and assist senior Afghan commanders in charge of some of the Afghan army's six corps as well as Afghan special operations forces. Kandahar in southern Afghanistan is also vital for the embryonic Afghan air force and supports smaller bases in the Taliban heartland. Jalalabad, to Kabul's southeast, is the main base facing Taliban and other militants that enjoy safe haven in Pakistan, which sees them as a way to maintain influence inAfghanistan. Washington does not disclose the number of US troops at each of its remaining bases in Afghanistan. Former US officials said that there appeared to have been remarkable unanimity among the US national security agencies over the merits of slowing the withdrawal in the face of some skepticism from the White House. "It's not just the generals against the civilians. It's the generals and the civilians against the White House," said David Sedney, a former Pentagon official responsible for Afghanistanand Pakistan from 2009 to 2013, stressing that this was his analysis. Sedney said Obama's decision last fall to authorize US troops to rescue Afghan forces "in extremis" -- something they have not needed to do this year -- and to keep extra soldiers inAfghanistan this year to make up for a shortfall from NATO partners were the first signs of a change in his approach. The first senior US official said it was unfair to suggest the White House and major agencies had been adversaries and said there was wide agreement to support Ghani, who agreed a power-sharing deal with Abdullah last year after a disputed election. – Reuters