US Senate leader: Obama on verge of 'very bad deal' with Iran 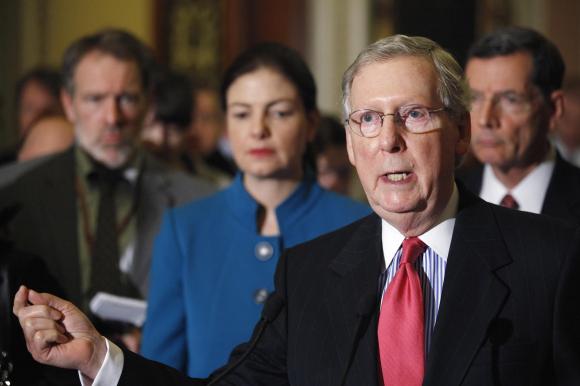 US Senate leader: Obama on verge of 'very bad deal' with Iran

WASHINGTON (Reuters) - US Senate Republican leader Mitch McConnell said on Sunday that President Barack Obama was on the verge of making a "very bad deal" on Iran's nuclear program and made clear that Congress will weigh in on any agreement. "Apparently the administration is on the cusp of entering into a very bad deal with one of the worst regimes in the world that would allow them to continue to have their nuclear infrastructure," McConnell said on CNN's "State of the Union" program. "We're alarmed about it." US Secretary of State John Kerry was resuming negotiations with the Iranians in Lausanne, Switzerland, on Sunday with the goal of reaching a framework agreement by the end of March. Kerry said on Saturday he hoped "in the next days" it would be possible to reach an interim deal. As negotiations intensified this month, opposition to the agreement in the works erupted in the US Congress. An open letter sent last week to Iran's leaders from 47 Republicans in the 100-member Senate warned that any nuclear deal reached with Obama may be undone after he leaves office in 2017. The letter was denounced by the White House and the State Department as interference into international negotiations. On Saturday, the White House warned Republican senators that proposed legislation requiring Congress to approve any accord reached with Iran over its nuclear capabilities could have a "profoundly negative impact" on negotiations. Obama has said he would veto such a measure, which also has support from some of his fellow Democrats. "I have supported the negotiations to this point but any deal that touches upon the congressional statutory sanctions is going to get a review of Congress," said Senator Tim Kaine of Virginia, a Democratic co-sponsor of the proposed legislation. "The only question is, are you going to have a constructive deliberate bipartisan process, or are you going be rushed and partisan?" Kaine said on NBC's "Meet the Press." If no Iran nuclear deal is reached, McConnell said, lawmakers will consider a separate bill to ratchet up sanctions against Tehran. Senator Tom Cotton, the freshman senator who organized the Republicans' letter on Iran, said his intent was to send a clear message to Iranian leaders that Congress has a say in the nuclear issue. "If they bluff this week, call their bluff," he said on CBS "Face the Nation" about the Iranians. "The Congress stands ready to impose much more severe sanctions."