US trying to blame Pakistan for failures in Afghanistan: Raza Rabbani


ISLAMABAD (92 News) – Senate chairman Mian Raza Rabbani has said that the United States is trying to shift the blame for its defeat in Afghanistan on to Pakistan.

Addressing the Six Nations Speaker Conference in Islamabad on Sunday, he said that Pakistan will not compromise on its sovereignty, adding that Pakistan does not need to take heed of any ‘notice’ from a foreign nation including the US.

The Senate chairman went on to say that the world has rejected the decision of the US recognition of Occupied Al-Quds (Jerusalem) as Israel’s capital.

Mian Raza Rabbani gave an overview of the challenge facing the world and said these stem from failures of the international community and the UN to adopt right approaches to address them.

“A new nexus among the United States, Israel and India has emerged, adding that the Washington is trying to promote India as policeman of the region,” he added.

Pakistan believes in dialogue and friendly relations with its neighbors, the Senate chairman said. 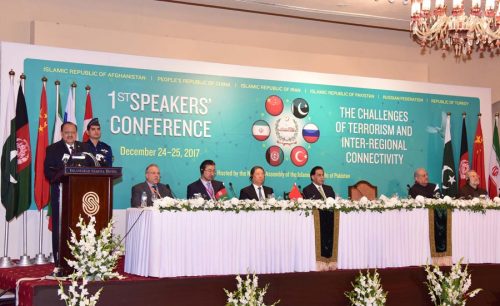 On the occasion, President Mamnoon Hussain said that Pakistan has extended sincere and unconditional cooperation for peace and stability in Afghanistan, adding that Pakistan has offered its fullest cooperation to the neighboring countries for effective control of borders as part of its counter-terrorism strategy.

He said that future of the region is deeply linked to active linkages, increased mutual trade and intensive cooperation.

The President said: “Terrorism has affected many countries of the world but Pakistan is its biggest victim and foreign powers are involved fanning terrorism in Pakistan.”

Referring to Kashmir dispute, Mamnoon Hussain said that the danger of war in the region can be mitigated by resolving the Kashmir issue as per resolution of the United Nations. 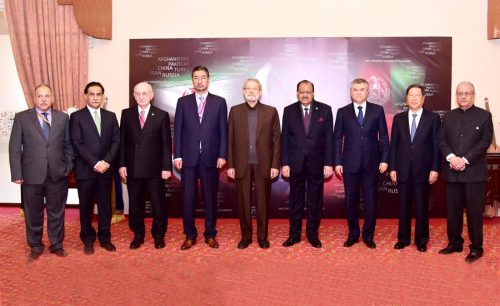 On the other hand, National Assembly Speaker Sardar Ayaz Sadiq while mentioning the sacrifices of Pakistan said that Pakistan is the biggest victim of terrorism. He proposed negotiated peaceful settlements of all outstanding disputes through parliamentary diplomacy.

The Speaker said that it is for the first time that parliamentary heads of six nations have gathered to re-affirm their commitment to shared peace, prosperity and forge new grounds of mutual cooperation.

He also regretted the recent decision of the US to move its embassy to Jerusalem saying it would undermine peace in the region.

Ayaz Sadiq proposed that the Speakers’ Conference should be made an annual feature and National Assembly of Pakistan can act as its Secretariat till a permanent secretariat is established.

Addressing the conference, Islamic Consultative Assembly of Iran Speaker Dr Ali Ardeshir Larijani said that the US campaign in the region will have to be stopped. “Islam is religion of peace and those misusing the name of religion for terrorist activities are doing no service to Islam,” he added.

State Duma of the Federal Assembly of the Russian Federation Chairman Vyacheslav V Volodin said we can defeat terrorism through collective efforts. He called for choking funding for terrorism and strengthening legislative measures.

Vice Chairman of the Standing Committee of the National People’s Congress of China, Zhang Ping said no country alone can address the challenges facing the mankind and therefore, we will have to work together to tackle them.