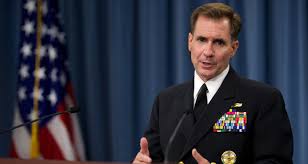 LAHORE (92 News) – United States (US) Department of State’s spokesperson John Kirby on Tuesday urged joint efforts between Pakistan and Afghanistan to curb terrorism. In a statement, Kirby said that Secretary of State John Kerry has called on Afghanistan president Ashraf Ghani. "The leaders talked about hideouts of terrorists in the country," he added. "Thet US is fully aware of the fact that it is not easy to destroy terrorists’ hideouts. He urged a close collaboration between Pakistan and Afghanistan to achieve the goal."