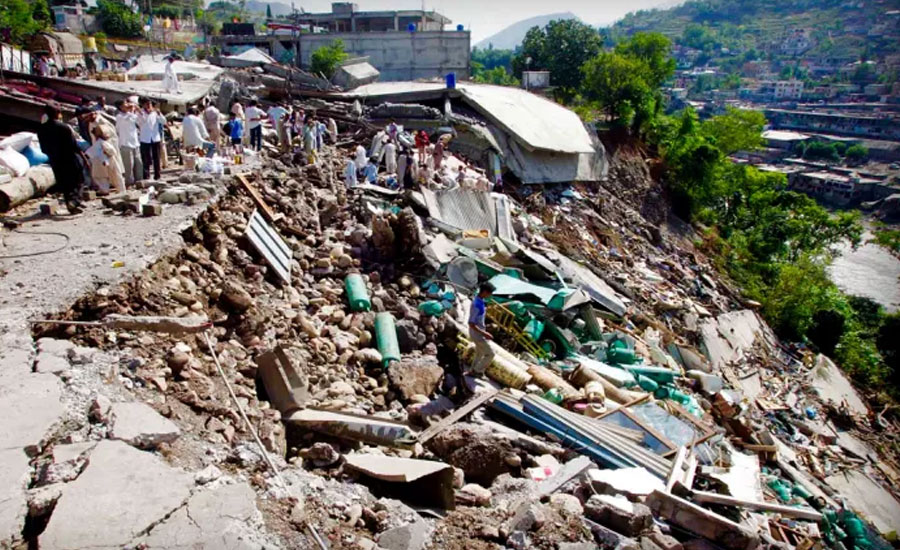 MUZAFFARABAD (92 News) – The 14th anniversary of 8th October earthquake is being observed in across Pakistan on Tuesday (today). On October 8, 2005, Azad Kashmir and Khyber Pakhtunkhwa were jolted by one of the most horrendous earthquakes of the history which took away lives of more than 80 thousand people. The 14th anniversary to pay tributes to martyrs of catastrophic earthquake 2005 is being observed in Azad Kashmir and today is public holiday. One minute silence was observed at all District Headquarters at 8:54 am. Quran Khwani, prayer ceremonies, documentaries show depicting events of miseries, pictorial exhibitions, awareness walks, candle vigils, seminars and speech contests will be held in all ten districts of the state. Main Prayer Ceremony will be held at University Ground Muzaffarabad.

In his messages, President Dr Arif Alvi has said that the observance of National Resilience Day is an occasion to evaluate and reiterate commitment at making greater preparedness to face natural calamities and by showing resolve for disaster risk reduction. The president said Pakistan observed the Day to express solidarity and sympathy with families affected by natural calamities. He also urged all the federal and provincial stakeholders to create synergies to ensure disaster risk reduction, preparedness, mitigation, and rehabilitation. Dr Arif Alvi also paid tribute to the people of Pakistan who had exhibited courage, selflessness, spirit of sacrifice and resilience in the face of catastrophes.

On the occasion, Prime Minister Imran Khan has reiterated that the Government would continue to adopt all possible measures for a disaster resilient Pakistan through more effective prevention, mitigation and preparedness. He said Pakistan is committed to fulfill its responsibilities mandated under regional and global frameworks on the Disaster Risk Reduction to which we are a signatory. The premier said that he would like to express his deepest condolences to the families of victims who lost their loved ones in the unfortunate earthquake. He also paid homage to the victims of recent earthquake in Mirpur, Azad Jammu and expressed the resolve that they would continue to provide all possible support to the people in the affected areas till their complete rehabilitation. Fourteen years before from today on October 8, 2005, the 7.6 magnitude earthquake struck at 8:52 in the morning. The earthquake ruined the cities of Khyber Pakhtunkwa. Thousands of people were killed, injured and handicapped in the catastrophe of earthquake. The horrible scenes cannot be forgotten after the 13 years. However, the tremor and aftershocks turned the entire cities including Bagh, Garhi Habibullah, Muzaffarabad cities of Kashmir and Balakot, Mansehra from Khyber Pakhtunkhwa into wreckage. The tragedy left more than three million people homeless.

GAZA (Reuters) – Israel bombarded Gaza with air strikes and Palestinian militants resumed cross-border rocket fire on Tuesday after a brief overnight lull during which the UN sent a small fuel convoy into the enclave, where it says 52,000 people are now displaced.

WASHINGTON (Reuters) - Africa needs carefully-calibrated domestic policies and stronger support from the international community to recover from the COVID-19 crisis and return to its path of stronger growth, the head of the IMF and the African Caucus said on Thursday.

YANGON (Reuters) – The families of dozens of people killed in demonstrations against military rule in Myanmar attended their funerals on Tuesday as more protesters defied the security forces and at least one man was shot dead.

OTTAWA (Reuters) - Prime Minister Justin Trudeau said Canada would commemorate the country’s more than 22,000 COVID-19 victims on Thursday and pay tribute to those fighting the virus.

California crash victims suspected of being smuggled across US-Mexico border

LOS ANGELES (Reuters) - The 13 people killed in a Southern California highway crash were part of a group of nearly four dozen migrants suspected of slipping through a hole cut by human smugglers through a steel fence along the U.S.-Mexico border, federal officials said on Wednesday.