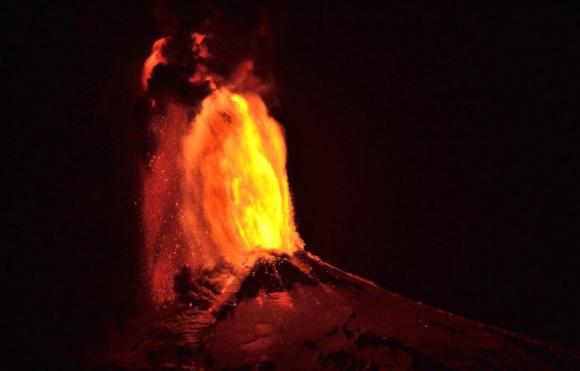 SANTIAGO (Reuters) - Volcano Villarrica in southern Chile erupted in the early hours of Tuesday, sending a plume of ash and lava high into the sky, and forcing the evacuation of nearby communities. The volcano, located near the popular tourist resort of Pucon around 750 km (460 miles) south of the capital Santiago, is one of South America's most active. It last erupted in 2000. A column of ash and rock particles shot up to 3 km (nearly 2 miles) into the night sky at around 3 a.m., said the national geological service Sernageomin. Some 3,385 people had been evacuated as a preventative measure, said Interior Minister Rodrigo Penailillo. After day broke on Tuesday morning, TV pictures showed intermittent steam and gases spewing from a fumarole, or opening, on a side of the volcano and rivulets of lava coursing down the mountain slopes. The eruption is a 'stromboli eruption', an event of relatively low impact characterized by low volumes of material reaching an altitude of less than 5 km (3 miles), said Sernageomin. Ash from the volcano was for now well under the flight paths used by commercial airliners, and flights were unaffected, said Juan Carlos Rojas, air transit head at the government's civil aeronautics division. Following an emergency meeting with police and military in the presidential palace in Santiago on Tuesday morning, Chilean President Michelle Bachelet said she would travel immediately to the affected region. Chile, situated on the so-called Pacific Rim of Fire, has the second largest chain of volcanoes in the world after Indonesia, including around 500 that are potentially active. In 2011, the eruption of Puyehue sent an ash cloud into the atmosphere that disrupted flights in neighboring Argentina for months. The government said experts from Sernageomin were flying over the Villarrica area to determine next steps.