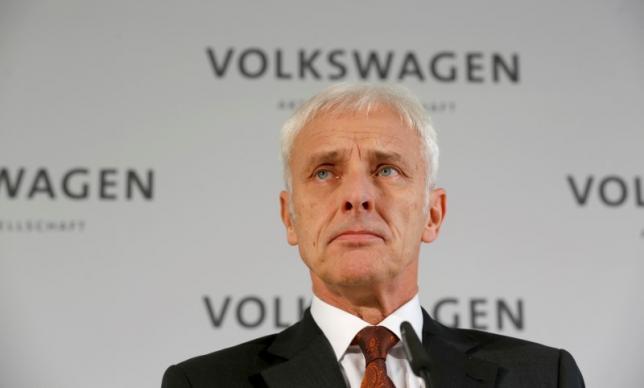 WOLFSBURG, GERMANY/WASHINGTON – Volkswagen AG (VOWG_p.DE) cut 1 billion euros ($1.1 billion) from its 2016 investment plan on Friday, as its emissions cheating scandal expanded to include tens of thousands more U.S. vehicles. Volkswagen has told U.S. regulators that emissions issues in larger luxury cars and SUVs extend to an additional 75,000 vehicles dating back to 2009, the U.S. Environmental Protection Agency said on Friday. The disclosure widened the scandal, which had previously focused mainly on smaller-engined, mass-market cars, and raised the possibility that engineers at both the Audi and VW brands could have been involved in separate emissions schemes. Earlier on Friday, the supervisory board of VW, Europe's biggest auto manufacturer, said it would cap spending on property, plant and equipment at around 12 billion euros ($12.8 billion) next year, down about 8 percent on its previous plan of around 13 billion euros. Volkswagen (VW) (VOWG_p.DE) is battling the biggest business crisis in its 78-year history after admitting in September that it cheated diesel emissions tests in 482,000 2.0-liter diesel cars sold in the United States since 2009. In November, the EPA and the California Air Resources Board also accused VW of evading emissions in at least 10,000 Audi, Porsche and VW sport utility vehicles and cars with 3.0-liter V-6 diesel engines. VW initially denied the findings. But during a meeting on Thursday, VW and Audi officials told the EPA that all 3.0-liter diesel engines from model years 2009 through 2016 had higher emissions than allowed. Audi spokeswoman Jeri Ward acknowledged that the 3.0-liter software at issue "meets (EPA and CARB's) definition of a defeat device." The new disclosure covers a total of 85,000 vehicles, the EPA said, including the diesel Audi 2016 Audi A6 Quattro, A7 Quattro, A8, A8L, Q5, Porsche Cayenne and Volkswagen Touraeg. Analysts have said the scandals could cost the company 40 billion euros or more in fines, lawsuits and vehicle refits. The widening scandal "slows VW’s ability to move beyond the negative headlines and start the rebuilding process," said Karl Brauer, senior analyst at Kelley Blue Book. "You can’t recover from a scandal while it's still growing. You have to reach a point where everything is on the table and no more bad news is coming — then you can start repairing the damage.” The EPA and CARB held a two-hour meeting on Friday with VW to discuss the company's plans for the 482,000 2.0-liter cars that the automaker has admitted have illegal software that allow them to evade emissions standards. The EPA said in a statement the automaker had provided an "initial proposal" for fixing the 2.0-liter diesel vehicles and that it would be taken under review. VW said in a statement late Friday it would "fully cooperate with EPA and CARB as we work to develop an approved remedy as quickly as possible" for the 2.0-liter diesels. The automaker added that it is "committed to making things right and regaining the trust of our valued customers." CARB and EPA plan another meeting with senior VW officials to discuss the issue in the first week of December. Chief Executive Matthias Mueller said in a statement: "We are operating in uncertain and volatile times and are responding to this. We will strictly prioritize all planned investments ... anything that is not absolutely necessary will be cancelled or postponed." The cut in capital spending is VW's first since the height of the financial crisis in 2009. In previous years, the company has published investment plans for several years ahead. But on Friday, it only gave numbers for next year, and did not give a figure for research and development, which last year accounted for about a quarter of overall planned spending of 85.6 billion euros for 2015-19. CUTBACKS Some analysts have long urged VW to reduce spending and become more efficient, with profit margins at its mass-market namesake brand lagging those at rivals. They have suggested the emissions scandal could provide an opportunity for management to force through changes that otherwise might have been resisted by the company's influential trade unions, and ultimately boost VW shares. VW's preference shares, down about a third since the crisis broke, were up 1.5 percent to 107.40 euros at 1355 GMT. Amid fears the emissions scandal could hit sales of diesel vehicles, Mueller said VW would increase spending on alternative technologies such as electric and hybrid vehicles by 100 million euros next year compared with previous targets. He said construction of a planned new design center in VW's home town of Wolfsburg was being put on hold, saving about 100 million euros, while the construction of a paint shop in Mexico was under review. In the model range, the successor to the high-end Phaeton saloon, an electric model, is being delayed. Earlier on Friday, the European Commission gave VW until the end of the year to provide information on its overstatement of fuel efficiency in some vehicles. VW also said Mueller would temporarily take on responsibility for personnel matters until a replacement was found for Horst Neumann, who retires at the end of November. It named two new employee representatives to the supervisory board as well, to replace departing ones. –Reuters