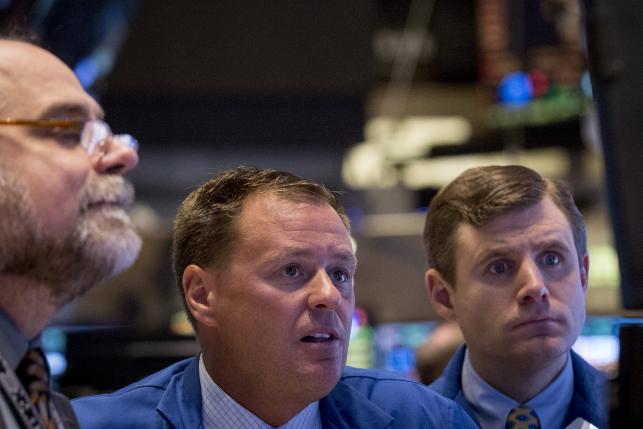 NEW YORK - US stocks declined on Tuesday as China's surprise devaluation of the yuan currency hit companies with a big exposure to the country and added to worries about the global economic outlook. Apple (AAPL.O) fell 5.2 percent to $113.54 in its biggest daily percentage decline since late January 2014, and the stock was the biggest drag on all three major indexes. Jefferies raised concerns about the demand for the iPhone, primarily in China. Among other companies with a big exposure to China, Caterpillar (CAT.N) was down 2.6 percent at $78.04. Yum Brands (YUM.N) fell 4.9 percent to $83.54. General Motors (GM.N) shares fell 3.5 percent to $30.83, though it said the devaluation of the yuan would have a "limited and manageable" impact on its business. The currency move by the world's top metals consumer pushed copper and aluminum to six-year lows, and the S&P materials index .SPLRCM dropped 1.9 percent, leading sector declines for the S&P 500. Freeport-McMoRan (FCX.N) dropped 12.3 percent to $10.22. "Obviously this devaluation seems to suggest there's a lot of weakness, and we're in thinly-traded markets right now," said Eric Kuby, chief investment officer at North Star Investment Management Corp in Chicago. "To a certain extent, the stocks that have propped up the market this year have slowly fallen out of favor, so I think that you're seeing a little bit of a flight to safety." The Dow Jones industrial average .DJI fell 212.33 points, or 1.21 percent, to 17,402.84, the S&P 500 .SPX lost 20.11 points, or 0.96 percent, to 2,084.07 and the Nasdaq Composite .IXIC dropped 65.01 points, or 1.27 percent, to 5,036.79. The yuan fell to its lowest against the dollar in almost three years following what China's central bank described as a "one-off depreciation." Alibaba shares (BABA.N) fell 3.9 percent $77.34. The day's stock market declines followed a rally on Monday that gave the S&P 500 its biggest increase since May. Google (GOOGL.O) rose 4.3 percent to $660.78 after it said it would overhaul its operating structure. The stock gave the biggest support to the Nasdaq and the S&P 500. Declining issues outnumbered advancing ones on the NYSE by 1,932 to 1,152, for a 1.68-to-1 ratio; on the Nasdaq, 1,967 issues fell and 848 advanced, for a 2.32-to-1 ratio favoring decliners. The S&P 500 posted 10 new 52-week highs and 17 new lows; the Nasdaq recorded 40 new highs and 104 new lows. - REUTERS