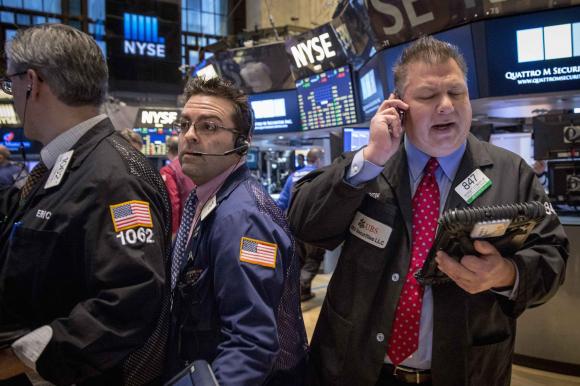 NEW YORK (Reuters) - Stocks were mostly higher on Monday, boosted by a couple of billion-dollar deals, while an increase in the price of crude oil supported energy names. The gain comes one session after the S&P 500's biggest drop in almost two months, as well as two straight weeks of declines for major indexes. The S&P 500 is about 2 percent below its record closing high, as is the Dow. The Nasdaq is 2.4 percent below its record close hit in March 2000. "We’re positive on the stock market here, and the recent setback last week just provides better opportunity to buy," said Tom Mangan, senior vice president at James Investment Research Inc in Xenia, Ohio. Alcoa Inc (AA.N) said it would buy RTI International Metals Inc (RTI.N) for $1.5 billion. Separately, Simon Property Group (SPG.N) offered to buy Macerich Co (MAC.N) for $22.4 billion including debt. Alcoa lost 6.4 percent to $13.55 while RTI jumped 38 percent to $37.62. Macerich rose 6.1 percent to $92 and Simon Property was up 0.1 percent at $180.78. "You'll see these kinds of deals continue to be announced since money is so cheap right now that you can borrow all you need to make them happen," said Mangan, who helps oversee $6.4 billion. "This will be very good for small-cap stocks, and it also suggests that the market isn't overly expensive overall." Whiting Petroleum Corp (WLL.N) rose 12.9 percent to $38.42. Late Friday, the Wall Street Journal reported that the company was seeking a possible buyer, though a person familiar with the board's thinking told Reuters he was not aware of such a plan. US crude futures CLc1 rose 1.7 percent to $50.43 per barrel after market data firm Genscape reported a modest stock build last week at the Cushing, Oklahoma delivery point for oil. The S&P energy sector .SPNY rose 0.4 percent and was one of the strongest S&Psectors. Chevron Corp (CVX.N) rose 1.7 percent to $105.29, supporting the Dow. General Motors (GM.N) said it plans a new, $5 billion share buyback in an agreement with dissident investors, and put forward more details on capital allocation that promises investors the potential for further cash returns. Shares rose 2.8 percent to $37.57. At 12:33 p.m. (1633 GMT), the Dow Jones industrial average .DJI rose 107.73 points, or 0.6 percent, to 17,964.51, the S&P 500 .SPX gained 4.79 points, or 0.23 percent, to 2,076.05 and the Nasdaq Composite .IXIC dropped 1.56 points, or 0.03 percent, to 4,925.81. Declining issues outnumbered advancing ones on the NYSE by 1,495 to 1,466, for a 1.02-to-1 ratio; on the Nasdaq, 1,315 issues rose and 1,314 fell for a 1.00-to-1 ratio favoring advancers. The S&P 500 was posting 6 new 52-week highs and 9 new lows; the Nasdaq Composite was recording 41 new highs and 45 new lows.