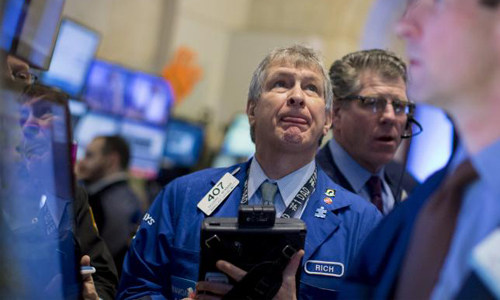 NEW YORK - US stocks rose on Monday as expectations the Federal Reserve could hold off longer on raising US interest rates offset concerns over Friday's surprisingly weak monthly jobs report. The jobs report came in well below expectations, with data showing US employers last month added the fewest jobs in over a year. US stock markets were closed for the Good Friday holiday. Underscoring the economic weakness, an ISM report on Monday showed the pace of growth in the US services sector fell in March to its lowest level in three months. "The weekend allowed market participants to see the positive side of the weak Friday (jobs) number, which is that rates probably aren't going to rise very quickly," said Rick Meckler, president of investment firm LibertyView Capital Management in Jersey City, New Jersey. The Fed is expected to raise US interest rates later this year for the first time in almost a decade if the economy, especially the labor market, keeps improving. The S&P utilities sector, which tends to outperform in low interest rate environments, rose 1.3 percent, making it among the best-performing sectors of the day. The S&P energy sector, up 1.8 percent, led gains as US crude oil futures jumped 6.1 percent after Saudi Arabia raised its price for sales to Asia and estimates for crude buildups fell. The Dow Jones industrial average rose 117.61 points, or 0.66 percent, to 17,880.85; the S&P 500 gained 13.66 points, or 0.66 percent, to 2,080.62, and the Nasdaq Composite Index added 30.38 points, or 0.62 percent, to 4,917.32. The day's gains left the Dow up 0.3 percent so far in 2015. The S&P 500 is up 1.1 percent since Dec. 31. The lackluster economic data also eased some concerns that the US dollar would continue to strengthen and pressure the earnings of companies with international exposure. "So far the data continues to suggest the economy remains weaker, not stronger," said Adam Sarhan, chief executive of Sarhan Capital in New York. Adding to the day's bullish tone, New York Fed President William Dudley said the US central bank will need to determine whether that jobs report foreshadows a more substantial slowing in the labor market, adding he expects the path of rate hikes to be "relatively shallow." US-listed shares of Amsterdam-based Uniqure soared 47 percent to $33.61 after a deal with Bristol-Myers Squibb to develop gene therapies for cardiovascular diseases. Tesla Motors Inc added 6.3 percent to $203.10 after it reported a 55 percent increase in deliveries in the first quarter. After the bell, shares of Humana Inc edged up 0.7 percent to $179.50. A US regulator said late on Monday that payments to health insurers operating Medicare Advantage plans for the elderly and disabled will increase by 1.25 percent in 2016. During the session, advancing issues outnumbered declining ones on the NYSE by 2,217 to 836; on the Nasdaq, 1,505 issues rose and 1,262 fell. The benchmark S&P 500 index posted 24 new 52-week highs and 3 new lows; the Nasdaq Composite recorded 74 new highs and 25 new lows. About 6.2 billion shares changed hands on US exchanges, matching the daily average for the last five sessions, according to data from BATS Global Markets. - REUTERS