Warner's 163 puts Australia in charge against Kiwis in Brisbane 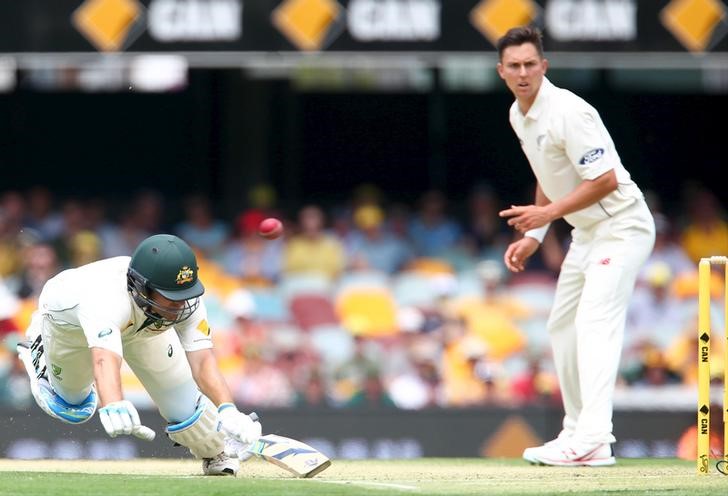 Warner's 163 puts Australia in charge against Kiwis in Brisbane

BRISBANE – Opener David Warner put New Zealand's bowlers to the sword with a masterful 163 and Usman Khawaja scored his maiden Test century as Australia dominated the opening day of the first Test at the Gabba on Thursday. The hosts finished on 389 for two with Khawaja, who was 102 not out, and new skipper Steve Smith, unbeaten on 41, set to resume their 78-run partnership on the second day of the three-test series. Warner, now one of Australia's senior players after the retirement of a string of seasoned internationals, displayed patience as well as his trademark aggression in his second highest Test innings. The 29-year-old had reached the half century mark in seven of his eight tests in 2015 but not been able to get to the century mark since he achieved the feat for the 12th time against India in Sydney in January. "I was a little bit more focused than I used to be, I really wanted to cash in and score a big one," Warner said in a pitchside interview. "Today, to get that one, and get the monkey off the back at the start of the summer, just feels fantastic." His leap into the air after tucking the ball through cover point for two runs was ample illustration of what the century Meant  to him, but he was by no means done.    His second Test 150 was brought up with his 19th four and he had perhaps earned the right to a loose swipe after 314 minutes at the crease when he got a thick edge on a James Neesham delivery which Ross Taylor caught brilliantly in the slips. Joe Burns, playing on his home ground in only his third test, had provided able support in a 161-run opening stand before he was caught behind off Tim Southee for 71 soon after lunch. TOUGH DAY That brought Khawaja to the crease and he quickly showed that more than two years in the Test wilderness had not diminished his elegant strokeplay. The 28-year-old got within one ru n of his third Test half century with a sumptuous six and a single off the 60th ball he faced got him to the milestone. Better was to come a few overs before the close, however, when he smashed his 10th four down to long-on to score a first Test hundred that many thought would come years sooner. Australia have not lost a Test at the Gabba since 1988 and an end to that streak looked less likely when Smith won the toss and chose to bat. New Zealand skipper Brendon McCullum needed strike duo Trent Boult and Southee to get the ball swinging while there was still cloud cover over the ground but it was not long before the sun broke through. The Black Caps conceded more runs than any side on the first day of a Test at the Gabba and Doug Bracewell (0-79), spinner Mark Craig (0-96) and Boult (0-90) will all want to forget the experience as quickly as possible. "It was a pretty tough day," said seamer Bracewell. "It didn't swing as much as we'd have liked (but) we've got to be more consistent than that." –Reuters