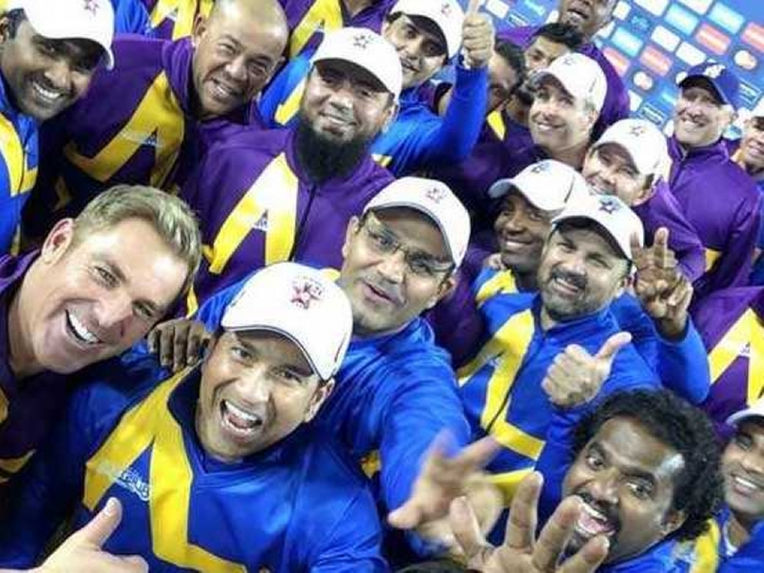 LOS ANGELES (92 News) – Sachin Tendulkar’s Blasters suffered their third successive defeat against Australian spin legend Shane Warne’s Warriors, going down by four wickets in a last-over thriller, to lose the Cricket All Stars T20 Series 0-3 at the Dodgers Stadium in Los Angeles on Saturday. Indian stalwarts Tendulkar (56) and Sourav Ganguly (50) showed glimpses of the past as they hit half-centuries to help their team post a challenging 219 for five in 20 overs. However, the Warriors overhauled the target with just one ball to spare, scoring 224 for six, riding on some spectacular innings by Kumar Sangakkara (42), Ricky Ponting (43) and Jacques Kallis (47). Electing to bat, skipper Tendulkar laid the foundation for a mammoth score as he first shared a 23-ball 55-run partnership with Virender Sehwag (27) and then forged a 74-run stand with Mehela Jayawardene (41) in just 34 balls. Ganguly then ensured that the Blasters end their innings on a high as he amassed 86 runs along with Carl Hooper (33 not out) for the fourth wicket in 8.3 overs. Daniel Vettori was the pick of the bowlers for the Warriors as he returned with a three-wicket haul, while Courtney Walsh (1/41) and Andrew Symonds (1/33) took one wicket each. Chasing 220 to win, the Warriors lost their opening batsmen Michael Vaughan (0) in the first delivery and Symonds (31) was also sent back in the fifth over. In the next over, Matthew Hayden (12) was also dismissed as they slipped to 52 for 3. Sangakkara and Jhonty Rhodes (17) then helped them cross the 100-run mark before the former was removed in the 11th over by spinner Graeme Swann. In the 14th over, Rhodes too was dismissed by Hooper. Kallis and Ponting then joined hands and collected 88 runs in 6.1 overs for the six wicket but the former lost his wicket with three runs still to get in as many balls.