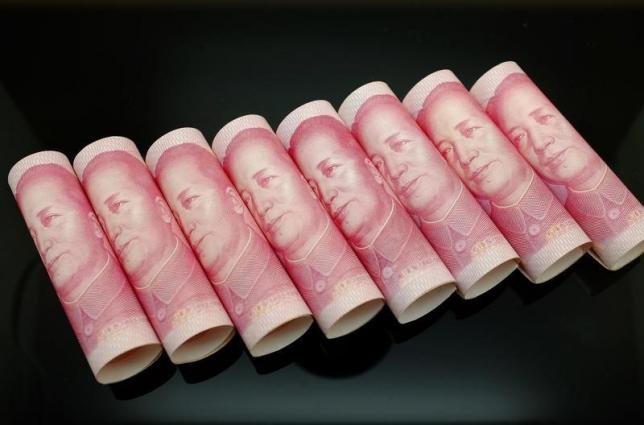 TOKYO - Japan has expressed concern to China about the pace of capital outflows from the country and has suggested Beijing moves very slowly in reforming its currency system to avoid repeating Japan's past mistakes. After a summer of market turmoil, China now appears to be at a critical juncture as capital outflows reach hundreds of billions of dollars and Beijing draws down heavily on its, albeit large, currency reserves to offset the impact of the money moving offshore. The stocks slump of more than 40 percent in a matter of a few months and the shock devaluation of the yuan acted as a reminder of how quickly Beijing could lose control of its markets if it moves too quickly to open up to market forces, Japanese officials say. "The pace of capital outflows is alarming," said a senior official with knowledge of Japan's currency diplomacy. "If China's financial system is destabilised, the effect on Japan and the rest of Asia would be enormous." Publicly, Japanese officials have urged China to proceed with reform and expressed confidence that Beijing has the tools and expertise to manage. But privately, they have adopted a different tone, cautioning Beijing against moving too quickly to free up the yuan when large capital outflows could make the currency a target for speculators. Japan has conveyed its concerns to Chinese officials at various meetings this year, including at the G20 financial leaders' meeting in Turkey in September. China took a big step towards internationalizing its currency on Friday, when IMF staff and the institution’s head Christine Lagarde endorsed the inclusion of the yuan in the fund's benchmark foreign exchange basket, known as Special Drawing Rights (SDR). Analysts estimate inclusion could lead to demand for the yuan worth more than $500 billion. "It should be the other way around," said a Japanese official, who declined to be identified because of the sensitivity of the matter. "Reforms come first, then you debate whether the yuan can join the SDR." China is trying to engineer a shift in the economy away from manufacturing and towards consumption and services while promising to fully liberalise the yuan by 2020 – a goal some Japanese officials feel is to ambitious. Japan's cautious tone is at odds with the more robust calls from Washington - underlined last week with comments from U.S. Treasury Secretary Jack Lew urging Beijing to press ahead with its reform plans. But Japan's views carry weight with Beijing, which has long taken a close interest in how Japan emerged in the past three decades as a global economic power. It views Japan's handling of capital flows and the yen as key factors that led to its asset bubble blow-up in the early 1990s that led to nearly two decades of deflation Japan is still struggling to eradicate. For decades, China's main concern was the amount of foreign currency coming into the economy as it built a huge export engine. But since China surprised world markets by devaluing its currency around 2 percent in August, net capital outflows have reached $200 billion, while Beijing appeared to have spent $229 billion in foreign exchange intervention to prop up the yuan in the third quarter, a U.S. Treasury Department report showed last month. "WORST THING IS TO MOVE TOO QUICKLY" Japanese policymakers are not suggesting there is an immediate risk of a financial crisis, but they say China's heavy intervention in markets to offset the capital outflows shows Beijing is worried. If China liberalises its currency too quickly and before it fixes other problems in the economy, such as high debt, Beijing may struggle to contain capital outflows and that may take a toll on its $3.5 trillion in currency reserves, Japanese officials say. "Market liberalisation sounds nice. But it could cause various problems," said Eisuke Sakakibara, who as a senior Japanese finance ministry official wrestled to contain volatile yen swings with heavy intervention in the late 1990s. "When an economy moves from fast-growth to stable growth, you're bound to have some market turmoil. The same thing could happen in China, so the worst thing to do is to move too quickly to a free-floating currency regime." China said the devaluation of the yuan reflected market forces, but the move jolted global markets on fears it meant the economy was in worse shape than previously thought. China is Japan's biggest trading partner and its markets have become susceptible to big swings caused by Chinese policy decisions. Any repercussions to Asia also affect many Japanese firms and banks operating in the region. Such impact was highlighted when China's yuan devaluation sent Japanese and global stock prices tumbling, as investors initially struggled to understand Beijing's motives. "There was lot of second guessing over China's policy intention and that was because the communication was poor," said a China-based Japanese government official. BANKING WOES LOOM Both Prime Minister Shinzo Abe and Finance Minister Taro Aso have called on China to address structural problems in the economy, such as bad loans and excess industrial capacity, and to provide transparency of policymaking. If China fails to tackle these problems, the risk is that it will not be just China that will feel the impact. "The biggest risk for Japan is a hard-landing in China," said Naoyuki Shinohara, a former IMF deputy managing director who retains close contacts with incumbent Japanese policymakers. "China's real 'black swan' is its bad-loan problems." -Reuters