ISLAMABAD (92 News) – In an affidavit submitted to the Islamabad High Court (IHC), Accountability Judge Arshad Malik claimed that he was blackmailed and offered bribe to favor Nawaz Sharif in the Al-Azizia Reference Case.

In his written statement, Judge Arshad Malik – who has been removed after the ‘video leak’ scandal against him – also claimed that he was blackmailed by the Pakistan Muslim League N (PML-N) through and old video tape of him which had secretly been filmed in Multan 16 years ago.

The affidavit read that the tape was used to blackmail me over and over again and wanted favors for the accused PML-N quid. The affidavit describes a meeting of the judge with the deposed Prime Minister at his residence to which he was taken to by two men. 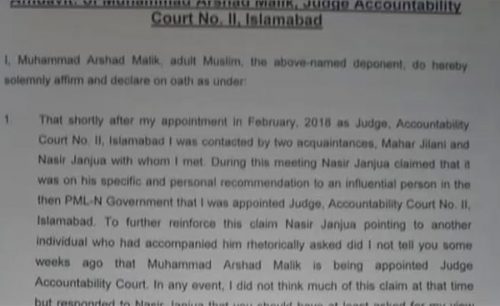 Nawaz Sharif before being sentenced to jail in that meeting asked the judge to hold a dialogue with the two men who had brought him to nawaz Sharif residence, Jati Umra.

“PML-N quid’s son Hussain Nawaz offered him bribes up to Rs 500 million and offered him residence as well as settlement in a foreign country of his chosen if he resigned on the base that he ashamed for verdict of Al-Azizia,” the affidavit unveiled.

According to IHC spokesperson, the IHC acting chief justice sent a letter to Law Ministry for taking back the services of Arshad Malik as accountability court judge.

Earlier today, Judge Arshad Malik wrote a letter to the IHC, in which, he rejected all the accusations leveled against him in the alleged video. The respectable judge also submitted his reply, affidavit, press release and other documents.

The IHC spokesman said that the chief justice is reviewing the letter for further actions.