We are constructing Motorway as well as Metro, says PM Nawaz Sharif 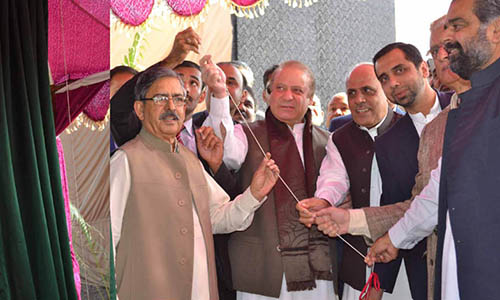 We are constructing Motorway as well as Metro, says PM Nawaz Sharif

MULTAN (92 News) – Prime Minister Nawaz Sharif has said that they are constructing Motorway as well as Metro on Saturday. Inaugurating the Multan-Khanewal Motorway, he said that progress in Pakistan was hampered in the past. “The problems like terrorism were created. Pakistan would have been prosperous had the government not ended,” he maintained. The prime minister also presented a review of uplift projects. “Small projects have been completed, while big projects have been started. No one can criticize the Motorway projects,” he said. Nawaz Sharif said that the Gwadar project was creating a history. He said that the power rates had been reduced and would further be reduced. Earlier, he was briefed that M4 project would benefit the traffic coming from Balochistan.