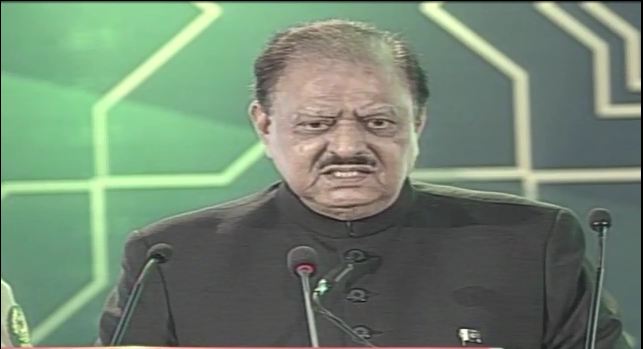 ISLAMABAD (92 News) – President Mamnoon Hussain has said that we are in a state of war but we will overcome all the problems and crisis, adding that every day is lightening hope. Addressing the flag hoisting ceremony in connection with Independence Day celebrations at Convention Center in Islamabad on Friday, Mamnoon Hussain congratulated the nation on Independence Day. “The day brings back the memories of the sacrifices of the elders,” he said. The president said that there is a need to rein in corruption and stabilize the economy. He said that the some elements conspired to create a wedge in the nation. He made it clear that Pakistan desires peaceful coexistence with all the neighboring countries including India but any threat to its security will be thwarted. He praised the Pakistan Army for its sacrifices, and also mentioned the students of Army Public School who, he said, sacrificed their lives for the country. He said the entire nation stands by the government and the armed forces in this war against terrorists who are on the run now. He hoped that this problem will be overcome in a short span of time. The president also vowed to protect the country’s sovereignty.