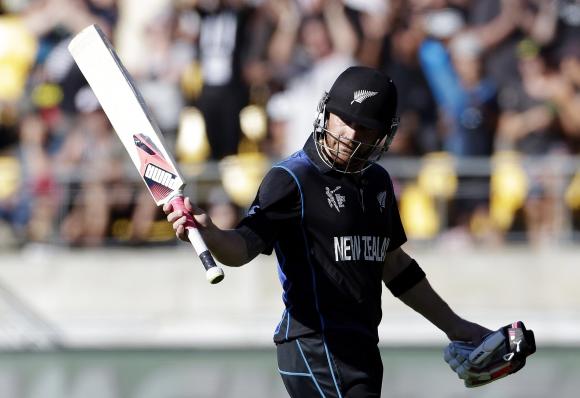 WELLINGTON - New Zealand will stick with their crash, bang, wallop brand of cricket in Saturday's World Cup quarter-final against West Indies because it gives them the best chance of winning, captain Brendon McCullum said on Friday. The 33-year-old McCullum has electrified the tournament with his belligerent attacking style, both with bat in hand and through his tactics in the field, as New Zealand reached the last eight unbeaten. "I think it's safe to assume that we'll still try to play an entertaining and attacking brand of cricket," McCullum told reporters at the Basin Reserve on Friday. "We want to play that brand of cricket. We've identified that that is what is going to make us a team which is going to be tough to beat (and) I can't see that changing. "Just because there's pressure on a game, it shouldn't take you away from what's your best opportunity to win." McCullum has received plaudits from around the cricketing world for his captaincy, including Richard Hadlee, New Zealand's finest ever cricketer, who was the first man to take 400 test wickets. "It's great for the game," he told Reuters. "It's what our game needs. "Brendon is explosive with the bat, very proactive in the field, very attacking in the field, backs his bowlers to do a job. "We've got a couple of very good bowlers now and we're exceptional in the field with people putting their bodies on the line, including Brendon himself. "We're attacking and playing an aggressive, bright, entertaining style of cricket that's good for television and the fans that come along. All these things are progressive and we're well respected in all forms of the game now." TAKING NOTICE McCullum's batting -- three half-centuries at a strike rate of 187.59 -- has also captured the public's imagination. Most notably for New Zealand's chances of advancing to a semi-final against South Africa, his highest score of 77 from 25 balls came against England at Wellington Regional Stadium. "The cricket we have played has... made people around the world sit up and take notice," he added. "That style of cricket that we're playing has obviously served us well and if things don't always go according to plan then you obviously have to move into Plan B. "But I think we've got the players, not just skill-wise but also the characters within the group that can quickly adjust to that." Expectations in rugby-mad New Zealand have been ramping up with their team in such good form and the business end of the World Cup approaching. McCullum said the squad were feeding off the excitement but were not letting it affect their preparations for the quarter-final. "The guys are certainly enjoying this tournament and the involvement we have had in it and the success we have had along the way," he said. "We will go out there and enjoy the moment we have been presented in a full house in Wellington and hopefully we perform accordingly." - Retuers