We are ready to hold talks for rights of Balochistan, says Baloch leader Barhamdagh Bugti 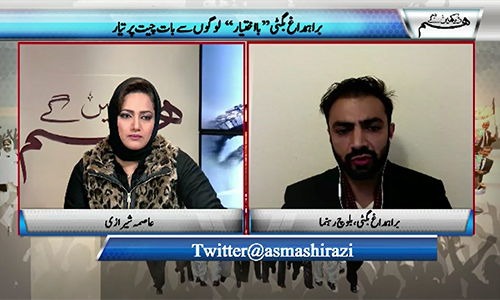 We are ready to hold talks for rights of Balochistan, says Baloch leader Barhamdagh Bugti

QUETTA (92 News) – Self-exiled Baloch leader Barhamdagh Bugti has said that they are ready to hold talks for the rights of Balochistan. In 92 News Program ‘Hum Dekhain Gaay’, he said that his grandfather was also a supporter of dialogues and had also tried to resolve the problems. “We will present the conditions if the government is sincere. No one seems to be serious. I think we are being checked,” he said. He said that Balochs are political-minded people and want the resolution of issues politically. “It will be wrong if we were coerced to talks,” he maintained.