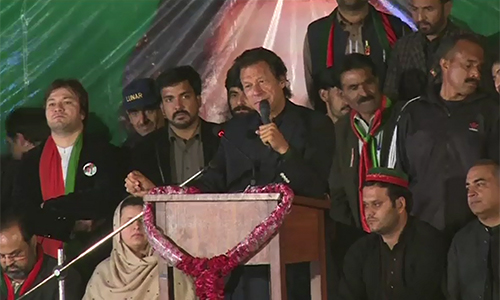 ISLAMABAD (92 News) – PTI chairman Imran Khan has said that they want the country as envisioned by the Quaid-e-Azam and Allama Iqbal, not the Sharifs and Zardaris. Addressing an election meeting on Friday, he said that children of the rulers were ready to take their turns if they did not rise against them. Imran Khan said that Mian Sahin had permission to give the Rs 2.5 billion package, but he was not allowed to make a speech. “Is it justice?” he said. He said that why he was stopped from addressing the meeting when he was not the minister. “The crime will increase if we did not stop it. It is Jihad and we should wage Jihad against cruelty,” he said. He alleged that Asif Zardari had devoured Rs six billion of Pakistanis.