We will not take pressure of super power, threats: PM


LAHORE (92 News) – Prime Minister Imran Khan on Sunday clarified that Pakistan’s desire for peace should not be construed for its weakness.

Addressing to the public servants, Imran Khan said, “we will not take pressure of super power and hurling threats. Indian govt should drop its arrogant attitude. Normalizing of ties is in greater interest of both.”

To responding statements of Indian army chief, the prime minister mentioned that Pakistan’s desire for peace should not be construed for its weakness. For visit to Kingdom of Saudi Arabia, he rejected rumors of begging and asserted that he visited the KSA to bring investment to Pakistan.

PM Khan vowed to rid bureaucracy from political interference. “Neither will we coerce any bureaucrat to perform an illegitimate act nor will we make political transfers,” he said. He also assured to fix faults in the governance system at earliest. 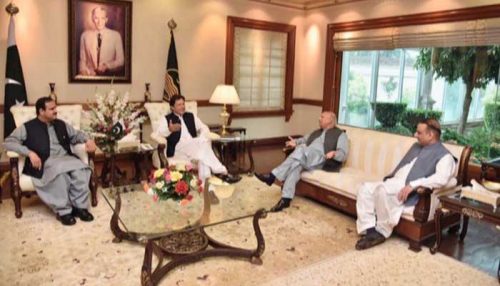 The local government minister apprised the PM of the priority agendas of all departments for the 100-day plan.

Further, the prime minister will chair a session of the Punjab Cabinet at 3pm. Punjab Health Minister Dr Yasmin Rashid, Forestry, Wildlife and Fisheries Minister Sibtain Khan and Tourism Minister Raja Yasir Humayun are expected to take approvals for important projects from the prime minister during his visit to Lahore.

The PM will also meet PTI leaders and head of National Commission on Police Reform Nasir Khan Durrani. Nasir will inform his progress about the police reform. Mainwhile, PM Khan along with his political team will review preparations for the upcoming by-polls.