We won’t allow any country to use proxies against Pakistan: COAS

The address focused on professional matters, internal and external security situation of the country and his vision of an enduring peace within Pakistan and the region.

Addressing the course participants, COAS emphasized Pakistan’s resolve and determination to confront global phenomenon of terrorism and extremism and cleanse Pakistan of this menace.

He said during the Operation ZeA, Pakistani nation has emerged as the most resilient nation of the world.

Dilating upon progress in concluding phase of kinetic prong of Operation Zarb-e-Azb, he explained how they had transited from hardcore kinetic operations to intelligence-based operations and now combing operations.

He said that defeated terrorists and their sympathizers inland and abroad were now frustrated and going for softer targets. “Remaining steadfast, and with an enhanced awareness and participation, we as a nation must pursue our national objective of zero presence of terrorists and total peace at any cost.”

The COAS said: “The contours of future war are fast changing. While our enemies are stoking terrorism to demoralize us and destabilize our country, we are united, fully determined and capable of defeating their nefarious designs. Pakistan is opposed to using proxies against other countries and will also not allow any other country to use proxies against Pakistan.”

Earlier on arrival at NDU, the COAS was received by NDU President Lt-Gen Nazir Ahmed Butt. 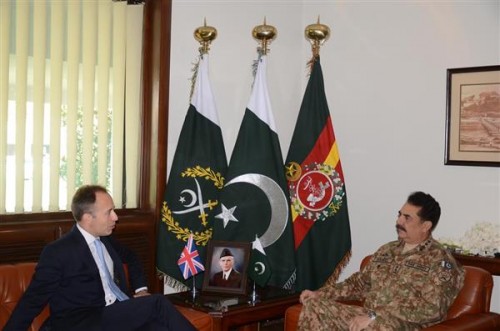 Matters of mutual interest and regional security came under discussion.