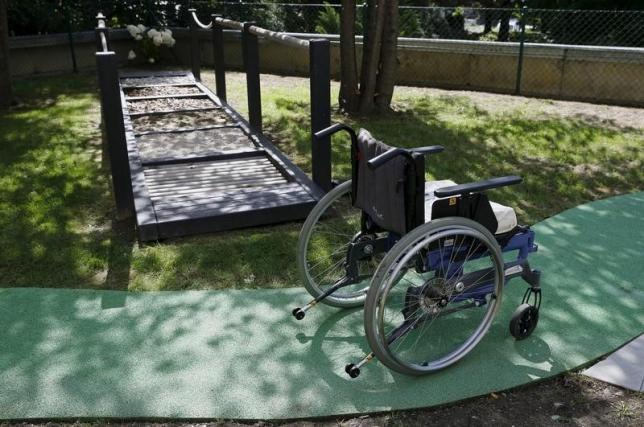 LAUSANNE - Wheelchair users may be more likely to die in collisions with cars than other pedestrians, an analysis of US crash data suggests. Pedestrians in wheelchairs were 36 percent more likely to die in these crashes than other people, the examination of accident records found. Men’s risk was more than five times higher than the fatality odds for female wheelchair users. The data don’t show why wheelchair users may be more vulnerable than other pedestrians. But the findings suggest that city planners should consider ways to make sidewalks safer and drivers should be aware that people in wheelchairs may not move or react in the same way as others do, said study co-author John Kraemer of the Department of Health Systems Administration at Georgetown University in Washington, D.C. “It is entirely possible that people who use wheelchairs may be at greater risk of death if they are in a pedestrian crash perhaps because drivers are less likely to see them, brake, and collide slower; because being lower to the ground wheelchair users may be hit more squarely; or because some people who use wheelchairs may have pre-existing medical vulnerabilities,” Kraemer said by email. But regardless of the reasons that wheelchair users may be more vulnerable, the take home message for drivers is the same, he said. “Pay attention, stop texting, obey stops and speed limits,” Kraemer said. “But also remember that there are road users like bicyclists and pedestrians like people with disabilities who may not be moving in exactly the same ways they would expect.” In the US alone, nearly 5,000 pedestrians are killed and another 76,000 are injured on public roadways each year, Kraemer and co-author Connor Benton at the Georgetown University School of Medicine write in the journal BMJ Open Access. To assess how vulnerable wheelchair users may be in car crashes, they looked at data from 2006 to 2012 from the National Highway Traffic Safety Administration’s Fatality Analysis Reporting System, which is based on police reports of collisions, as well as data from news reports of accidents. The researchers calculated that approximately 528 pedestrians using wheelchairs were killed in road traffic collisions during the study period, a death rate that is more than a third higher for wheelchair users than for the general population. Almost half of fatal crashes occurred in intersections and about 39 percent of these collisions happened in locations without any traffic control devices such as stoplights, the analysis found. Among intersection crashes, 48 percent involved a wheelchair user in a crosswalk; no crosswalk was available in about 18 percent of cases. In about 21 percent of the crashes, drivers failed to yield the right-of-way, while in about 78 percent of the collisions no crash-avoidance efforts by drivers were detected. The wheelchairs weren’t sufficiently visible in about 15 percent of the incidents. The study may have underestimated the proportion of fatalities involving wheelchairs, the authors acknowledge. That’s because motorized scooters weren’t counted as wheelchairs in the analysis since the available data was insufficient to separate mopeds and the like from mobility devices. Another missing piece of information is the type of wheelchairs involved in these accidents, noted Rory Cooper, director of the Human Engineering Research Laboratories at the University of Pittsburg in Pennsylvania. Overall, wheelchair users might be more vulnerable to crashes than other pedestrians because they might have a harder time moving quickly out of the way on sidewalks or because they might have to travel on the street when a lack of curb cuts makes it impossible for them to use sidewalks, Cooper, who wasn’t involved in the study, said by email. It’s also possible that people using power wheelchairs might be more agile at avoiding a collision than individuals in manual chairs, Cooper said. To stay safe, wheelchair users can also avoid crossing at intersections when they don’t have enough time or seek assistance to cross faster, Cooper noted. Reflective clothing may also make them more visible. Still drivers also need to pay closer attention. “Drivers should look for wheelchair users on roadways and treat them like a slower moving cyclist,” Cooper said. -Reuters