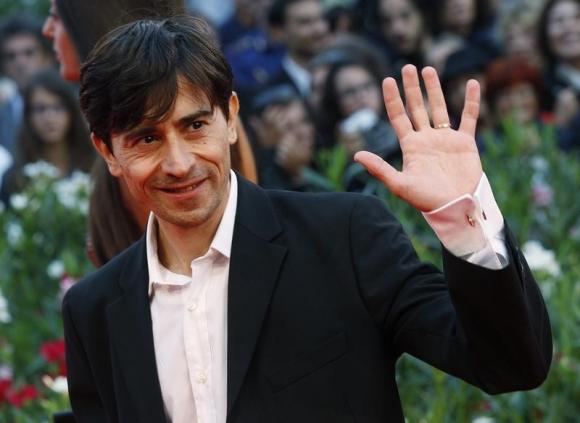 ROME - Actor and director Luigi Lo Cascio says he "stripped the flesh" from Shakespeare's great tragedy Othello for his new version, with a pared-down cast and a white-skinned Moor speaking Sicilian dialect. The production dispenses with sailors, officers, attendants, family members and the young lieutenant whose presumed love affair with Othello's wife Desdemona leads the debased general to murder her under the influence of his devious ensign Iago. Only Othello, Iago and Desdemona remain, joined by a soldier of Lo Cascio's invention who guides the story like the chorus in classical drama, and physically raises the curtain on one scene. Iago, portrayed by Lo Cascio himself, Vincenzo Pirrotta's Othello and the soldier Ludovico, played by Giovanni Calcagno, all speak Sicilian dialect -- a distinct language with the same roots as Italian that can be impenetrable to outsiders. Underlining her isolation, Desdemona, played by Valentina Cenni, is the only character to speak Italian as she daydreams about joining her husband at war, unaware that Iago is poisoning her husband's mind against her. Lo Cascio, a native of Sicily who has made films on social themes such as the 1978 kidnapping and killing of former premier Aldo Moro by Red Brigades guerrillas, chose the Sicilian dialect because he found standard Italian was not powerful enough to transmit Shakespeare's metaphors and wordplay. "Dialect came to my aid, it is closer to feelings, to emotions," he told La Repubblica. "A spectator should be able to be carried along even if they don't understand every letter." Applause at Rome's Quirino Theatre on Sunday afternoon suggested the production was having the desired effect on members of the audience who did not speak the dialect of the island which has a population of around 5 million. "At the beginning, I didn't understand it at all, but by the end you grasp the sense of the words," said Franco Scorretti, 73. "Staging Shakespeare in Sicilian dialect is a difficult and courageous experiment." Playing on the assumption that theatre-goers already know the story of the Machiavellian ensign who conspires to convince the general of his wife's infidelity, Lo Cascio's script rearranges the timescale. Iago stumbles through the audience -- apparently on his way to the gallows -- before the audience sees the murder he helped bring about take place. In this interpretation, "the story of Othello is the story of a man" and "what drives him to commit his evil act is clearly not due to the implications of having black skin", Lo Cascio writes in the director's notes. The production ends on March 29. - Reuters