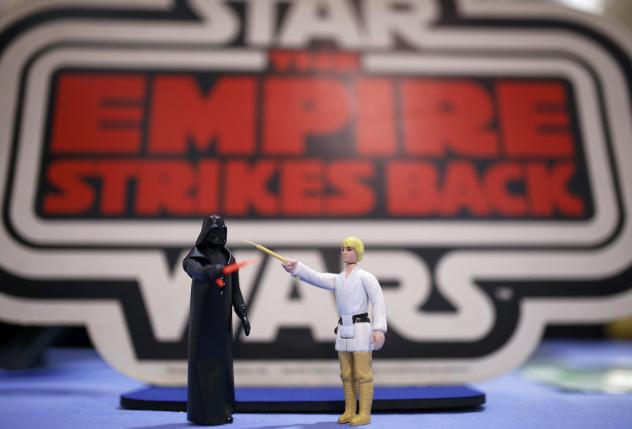 THORNABY - Vintage toys linked to the "Star Wars" film franchise are moving faster than a swirling lightsaber, sending prices of many of them soaring into hyperspace.

With the latest in the series - "Star Wars: The Force Awakens" - due to open in December, auctioneers in the northeast England town of Thornaby have sold one for a colossal 18,000 pounds ($27,000), 35 years after it went for 1.50 pounds in the shops.

This was not a historic piece of trivia like the movie-prop blockade-runner spaceship that California-based auctioneers Profiles in History sold for $450,000, or Princess Leia's actual slave costume, which went for $96,000.

With the proceeds of that, and mainly other toys anyone could have purchased for pocket money at the time, Stevens and his wife bought a house - for cash.

"I'd like to say I had some kind of vision but I didn't, I collected for myself," Stevens told Reuters, adding that some items he had collected had been about to be thrown away.Various collectors' hoards of "Star Wars" memorabilia, from robots, to spaceships, "Death Star" pencil sharpeners and on to packaged figurines, are piled up in Vectis, which will hold another in a series of online auctions of about 700 pieces on Dec. 8.

The most valuable toys are those that are sealed in their original packages from decades ago, having never been used, Kathy Taylor, Vectis's "Star Wars" expert, said, adding: "It's not a normal retail situation we're in here."

“It isn’t anything that’s just a toy," she said. "It’s actually a way of life and a cultural thing. People even look at some of these cardbacks that we sell as works of art."

One of the oddest items at Vectis is an inch-long (2.5-cm) piece of plastic that is a prototype for a Boba Fett rocket, never produced, and estimated at 800-1,200 pounds.

"We've been blown away by some of the prices," said Vicky Weall, the managing director of Vectis, which is stacked to the rafters with collectible toys of all sorts, including dolls, stuffed animals, toy trains and the increasingly valuable "Star Wars" items. The company makes a 20 percent commission on sales.

"Once you get two people who are desperate for an item, then where do you stop?" she said.

What's happened to the "Star Wars" collecting market is that it has gone from being unfashionable, when Stevens was able to pick up cases of stuff for peanuts, to becoming the source of some of the most sought-after items in the collector galaxy.

"'Star Wars' memorabilia ranks at the upper echelon, it runs at the top, alongside 'The Wizard of Oz', 'Citizen Kane', and 'Casablanca'," Brian Chanes of Profiles in History, the California auctioneer, told Reuters.

Even Sotheby's auctioneers, renowned for dealing in multi-million dollar paintings, is in on the act, offering the "Star Wars" miscellany of a Japanese collector on Dec. 11.

Chanes said most of his buying customers are "private individuals with deep pockets", but Bryan Goodall, chairman of Vectis, said his clientele come from all walks of life - from people who may spend a few hundred pounds to others who will spend thousands.

He said many are reliving their youth, and regardless of whether the new series of "Star Wars" movies is a hit, the market for collectibles will keep growing.

"I'm sure it will be a big hit because I'm sure everybody will love it, but it won't make any difference to us other than more people coming to the market," he said. -Reuters