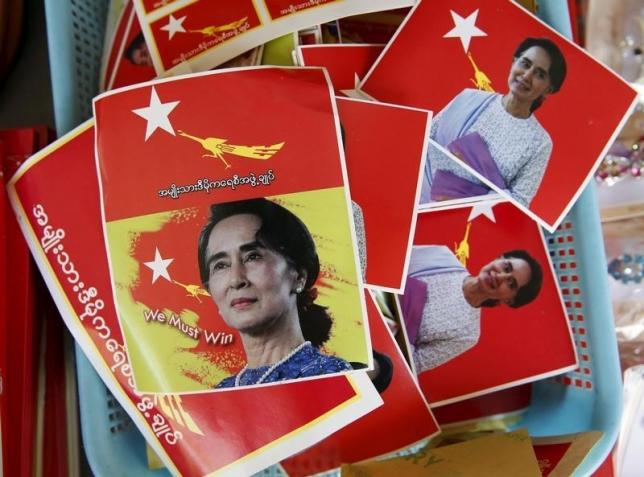 YANGON – In a ramshackle hospital in Myanmar's largest city, at the end of a corridor milling with patients, sits the man some people believe will be the country's next president. Tin Myo Win is the long-time personal physician of Aung San Suu Kyi, whose party is expected to win Sunday's landmark general election. That position has earned him a place on a list of presidential candidates, some of them improbable. Even if her National League for Democracy (NLD) wins big, Suu Kyi is barred from the presidency by a constitution written by Myanmar's powerful military. It ruled the country for nearly 50 years before a nominally civilian government ushered in an era of faltering reform in 2011. Suu Kyi vowed on Thursday to run the country from "above the president", filling the position with a proxy she has chosen but not disclosed, a move that could antagonize the military. It has also left Myanmar's voters with a presidential puzzle: If not "Mother Suu", as she is affectionately known, then who? An NLD loyalist and former political prisoner, Tin Myo Win, 64, was one of the few people allowed to visit the Nobel Peace Prize winner during her 15 years as a prisoner of the military. He seemed bemused at the prospect of being considered president. "My job is cutting and sewing - I am a surgeon," he told Reuters between consultations with patients at Yangon's Muslim Free Hospital, where he volunteers his services. But earlier he told the Irrawaddy, a Myanmar news service, that he would accept any offer of the presidency "for the good of the country." Myanmar's legions of Facebook users have already entertained and dismissed the possibility of Tin Myo Win becoming president. A more likely choice could be former general Shwe Mann, now the speaker of the lower house, or the party's aging patron, Tin Oo. "SOMETHING LIKE SONIA GANDHI" Even if Sunday's election is deemed free and fair, it will still only elect 75 percent of Myanmar's parliament, where a quarter of all seats are reserved for unelected military officers. On the eve of the election, it is still unclear whether the NLD can win enough votes to form a government and choose its own president, who does not have to be an elected MP. To get there, the NLD on its own or with allies must win more than two-thirds of all contested seats. The military-drafted constitution bars presidential and vice-presidential candidates with foreign children. Suu Kyi's two sons are British citizens. She said on Thursday that the constitution "says nothing about somebody being above the president". In fact, it does state that the president "takes precedence over all other persons" in Myanmar. But Suu Kyi could be "something like Sonia Gandhi," said Win Htein, a top NLD leader and Suu Kyi confidant. Gandhi is the Italian-born widow of the late prime minister Rajiv Gandhi. As leader of the Congress party, she dominated the government of former Prime Minister Mahmohan Singh before it fell from power last year. "We'll appoint someone (as president) but he will be controlled by Aung San Suu Kyi," said Win Htein. That proxy president would step down as soon as the constitution was amended to allow Suu Kyi to rule, he added, refusing to say who the NLD had chosen for a job he described as "benchwarmer." The arrangement was necessary due to "the ridiculousness of this constitution," he said. When asked if it would provoke the military, he replied: "It's not a provocation. It's a challenge." Another senior NLD leader struck a more cautious note. Han Tha Myint said any presidential candidate would have to be acceptable to the military, which had the power to make any government unworkable. –Reuters