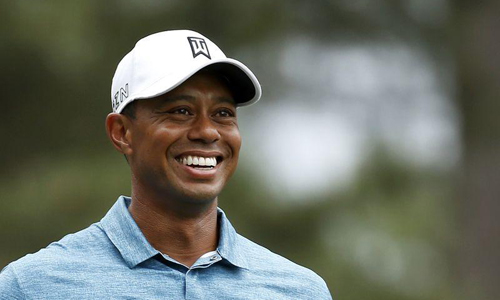 GEORGIA - Tiger Woods strolled up to his second shot at the short par-four third hole and routinely hit a 35-yard pitch shot at the pin that finished about eight feet from the cup to cheers at Augusta National. It was only a practice round with old friend Mark O'Meara on the Monday of Masters week, but it gave hope that the four-time winner of the green jacket might still be capable of major championship magic. Routine for the Woods of old, but full of drama for those who have cringed at the startling loss of short-game control that sent the former world number one into a self-imposed exile since he withdrew after 11 holes at Torrey Pines on Feb. 5. Woods made a late entrance on Monday, arriving at Augusta National after most of the practice round crowds had begun streaming out. When word began circulating that the 14-times major winner was hitting balls on the practice range, many patrons turned back and returned to watch him. Despite being the last pair to tee off on the front nine, a massive throng gathered at the first tee, and Woods was greeted with shouts of encouragement. Woods, who has also been battling to get comfortable with a new swing, hit his opening shot at the par-four first way left to the eighth fairway but showed a flash of brilliance by sending his second over the trees to five feet and made birdie. He reached the par-five second in two shots in another affirmative display, and at the 240-yard, par-three fourth hole threatened to make an ace before sinking the short putt for another birdie. Woods did not announce until last Friday that he would compete in his first Masters since 2013 after missing last year while recovering from back surgery. The pressure is on him after a two-month absence from the PGA Tour that followed an abysmal stretch in which his best finish in six official events was 69th at the British Open, dropping his ranking to 111th. But Woods, of course, is no stranger to pressure and if the touch has returned to his short game, he could burst back to prominence at the year's first major starting on Thursday. - REUTERS