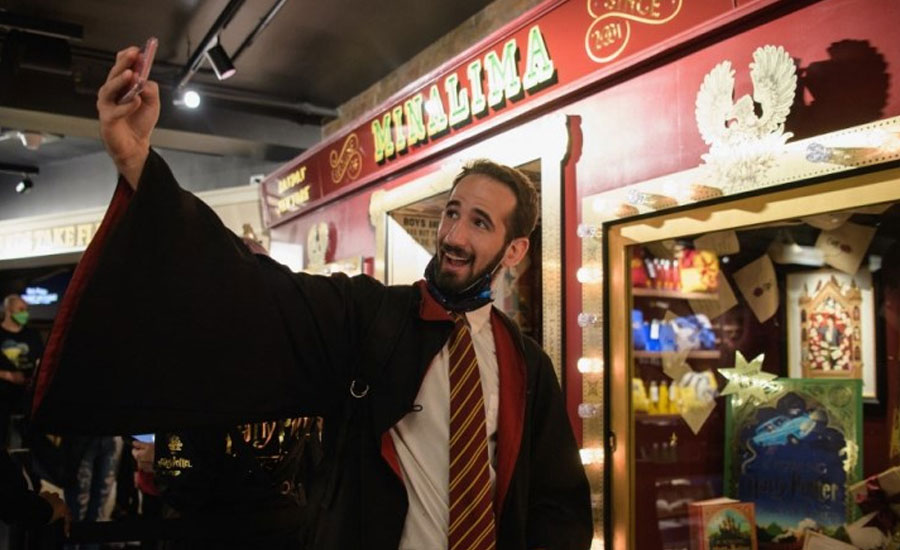 Fans of the boy wizard, wearing robes and witch hats from the beloved franchise, queued for hours in heavy rain to be among the first inside the three-story shop in Lower Manhattan that hosts the largest collection of Potter products anywhere.

Alohomora! The Harry Potter New York Store is officially open and Rita Skeeter was the first to step inside! @HarryPotterNY pic.twitter.com/PB4ukRrThE

“It’s really magical,” said Margaret Suarez, whose boyfriend arrived at 6:00 am to hold a spot in line four hours ahead of opening.

Suarez, 30, quickly eyed a wand belonging to witch Bellatrix Lestrange to go with the patronus charm memorabilia and funko pop figures that were already in her shopping bag.

“In my heart, I’m a wizard,” Suarez told AFP. “I really want to get a wand and personalize it so I can live my best fantasy,” the New Yorker added.

Inside the world's largest "Harry Potter" store - in NYC. pic.twitter.com/NwJuSTLLXO

Ruben Juarez, 27, and his wife traveled from Dallas, Texas for the grand opening of the 21,000 square-foot (1,950 square meters) store that is near the Flatiron building.

“We’re excited to be here. I love everything Harry Potter,” said Juarez, wearing the scarlet and gold scarf of the house of Gryffindor.

WIZARDING STORE OPENING - The world's first Harry Potter store opens its doors to a long line of fans wrapped around the block in the Flatiron District. They were waiting to see the magic inside and buy some collectibles from the classic book series. #1010WINS pic.twitter.com/rMwMdjik4R

Large crowds gathered outside the store throughout the morning, with even a few police officers called to ensure order was maintained, as Potterheads waited for their timed ticket entry.

Inside, fans of J. K Rowling’s magical world snapped selfies in front of a red telephone box like the one that transports witches and wizards to the Ministry of Magic, and bought fizzing whizbees candy.

They tried on knitted quidditch jumpers, flicked through copies of the best-selling book series in history and sampled the wizards’ favorite drink at the Butterbeer bar.

“Butterbeer is like cream soda but with a kick to it. It’s unlike anything, honestly,” explained 21-year-old Emilee Rodriguez.

The flagship store was due to open last summer but was delayed because of the coronavirus pandemic.

For 19-year-old Alexandra Ewing, the wait for her first visit to a Potter store was worth it.

“I’m having the time of my life. I’m fighting back tears this whole time, I’m loving it,” she told AFP.