Wounded toll at 25,000 a month in Syria, medicines lacking, cholera feared: WHO 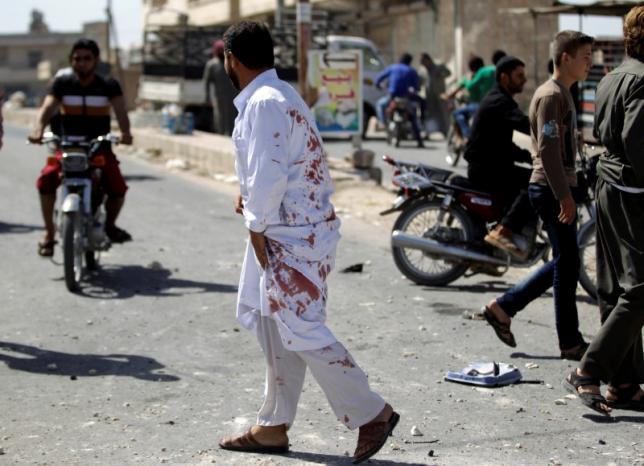 Wounded toll at 25,000 a month in Syria, medicines lacking, cholera feared: WHO

GENEVA - About 25,000 people are wounded each month in escalating warfare in Syria and it getting harder to deliver medical supplies for civilians trapped in areas held by Islamic State insurgents, the World Health Organization said. It said typhoid and diarrhea are on the rise due to the lack of clean water and with winter setting in, more acute respiratory infections are expected especially among children and the elderly. On top of that, there were concerns that deadly cholera could spread into Syria from Iraq. About 250,000 Syrians have been killed in 4 1/2 years of civil war with 11.5 million driven from their homes. Violence has worsened since Russia intervened on the government's side on Sept. 30, launching heavy air strikes on rebel-held territory. "The main concern is of course communicable diseases, but also trauma cases. We have more than 25,000 newly injured per month in Syria and the system is overburdened," Elizabeth Hoff, WHO representative in Syria, told a news briefing in Geneva. "This conflict is happening in densely populated areas, that's why have you have so high a number of injured compared to many other wars." Between the first and second quarters of 2015, there was a 30 percent rise in patients seeking treatment in Latakia hospital's emergency department, Hoff said, referring to a government-held coastal region where many displaced have fled. The Syrian government has restricted delivery of surgical supplies to opposition-held areas, she said. "We have compensated by supplying surgical supplies cross-border from Jordan and also from Turkey, and many international NGOs are stepping up to this task but it is certainly not enough." At least 60 percent of Syria's 113 public hospitals and 50 percent of the 1,783 primary health care centers have closed or been partially destroyed in the conflict since March 2011, according to the WHO's latest update. Many hospitals lack generators or even blankets, Hoff said. Vaccination coverage has dropped to only 60 percent among Syrian children under five, leaving them vulnerable to disease. "What we are trying to advocate is a truce so we can go in and have proper vaccination across Syria," Hoff said. The WHO has no contact with Islamic State forces controlling territory where an estimated 1.7 million Syrians live but has managed to deliver small amounts of medical supplies to a network of doctors there, she said. There has been no confirmed case of cholera in Syria, but an epidemic in neighboring Iraq has infected 2,671 people since September and spread to Kuwait and Bahrain, according to WHO. "Cholera is a high risk (in Syria), particularly after the outbreak that we have seen in Iraq ... We are facing this by deploying rapid diagnostic tests into many of the areas but access is not easy," Hoff said. Areas in Syria most vulnerable to a spread of cholera were primarily in the north and northeast including Deir al-Zor, al Hassakah, Raqqa, Aleppo and Idlib. -Reuters