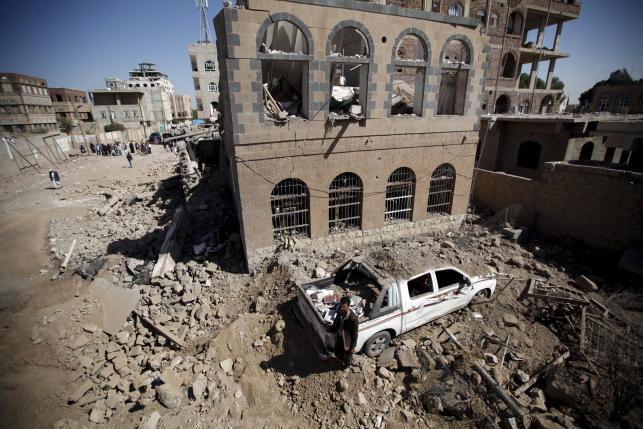 CAIRO - More than 50 people were killed in Yemen in the past two days in fighting pitting an Arab coalition against Houthi fighters backed by troops loyal to former president Ali Abdullah Saleh, medical sources and residents said on Sunday. In Taiz, medical sources told Reuters 29 people including eight civilians were killed in clashes in Yemen's third largest city, where relief workers have said fighting has blocked food supplies and left thousands of people in extreme hunger. About 30 people were killed in fighting in Damt district in Dhalea governorate in the south, residents said. At least 5,600 people have been killed in seven months of war in Yemen, the poorest country on the Arabian Peninsula, and the United Nations says the humanitarian situation, exacerbated by the Arab coalition's blockade of Yemeni ports, grows worse every day. The conflict pits the Iran-allied Houthis and army units loyal to Saleh against armed groups who support exiled President Abd-Rabbu Mansour Hadi alongside a Saudi-led Arab coalition. The coalition is fighting to restore Hadi to power following the Houthis' seizure of control of much of Yemen in late 2014 and early 2015, and reverse what it sees as an expansion of influence by Iran, the regional rival of Riyadh. Several residents said the Houthis and the forces loyal to Saleh had taken control of Damt district, and of al Qabbayta district in Lahej governorate. Other residents said without elaborating that anti-Houthi fighters had made a tactical withdrawal from those locations, and were receiving air support from the coalition. Peace efforts have made only limited progress. All major combatants have publicly agreed to implement U.N. Security Council Resolution 2216, which calls on Houthi and Saleh forces to withdraw from the country's main cities and surrender arms captured from Yemeni government forces. But while Hadi and the coalition have previously demanded that this happen before talks begin, the Houthis and Saleh want talks to address the mechanism for implementing Resolution 2216. -Reuters