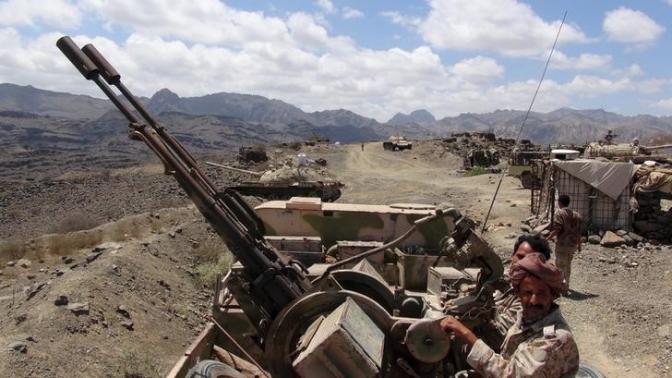 RIYADH/DUBAI- Yemen's top factions are squaring off for battle after months of skirmishes, turning respectively to neighboring Saudi Arabia and its regional rival Iran for help in what may become all-out war. With President Abd-Rabbu Mansour Hadi seeking a comeback from the port city of Aden while the Shi'ite Houthi movement controls the capital Sanaa, rival administrations are trading bellicose rhetoric as fighting intensifies and factions commandeer airfields for the next stage of the struggle. Somewhat on the sidelines, al Qaeda in the Arabian Peninsula (AQAP) and Islamic State are waiting to exploit what some fear could become Yemen's worst conflict since a 1994 civil war. "For years Yemen has defied all the odds and proved wrong those who said it was on the brink of civil war and about to collapse," Farea al-Muslimi, a researcher with the Carnegie Middle East Center said. "But we may have run out of miracles." Yemeni Foreign Minister Riyadh Yaseen called on Monday for Gulf Arab help to prevent the Houthis' getting air control. "We have expressed to the Gulf Cooperation Council, the United Nations as well as the international community that there should be a no-fly zone, and the use of military aircraft should be prevented at the airports controlled by the Houthis," he told the newspaper al-Sharq al-Awsat. United Nations mediator Jamal Benomar said on Sunday that Yemen had been pushed "towards the edge of civil war" that he believed neither the Houthis nor Hadi could win. "Any side that would want to push the country in either direction would be inviting a protracted conflict in the vein of an Iraq-Libya-Syria combined scenario," he told the Security Council. Violence has spread across the Arabian peninsula country since last year, when Houthi militia seized Sanaa and effectively removed Hadi, a US ally. This angered the Sunni-ruled Gulf states led by Riyadh, which regards the once obscure group from the northern highlands as terrorists. [caption id="attachment_10607" align="alignnone" width="500"] Anti-Houthi protesters run as pro-Houthi police troopers open fire in the air to disperse them in Yemen's southwestern city of Taiz March 23, 2015.[/caption] TEST OF STRENGTH The turmoil has made Yemen a front in Saudi Arabia's region-wide rivalry with Iran, mainly contested on sectarian lines, by creating an ally for Tehran in its backyard. Riyadh hosted top-level talks with Gulf Arab neighbors on Saturday that backed Hadi as Yemen's legitimate president and offered "all efforts" to preserve the country's stability. It was not clear if that included military aid. The Houthis, who share a Shi'ite ideology with Iran, have denied taking material and financial support from Tehran. But last year Yemeni, Western and Iranian sources gave Reuters details of Iranian military and financial support to the Houthis before and after their takeover of Sanaa on Sept. 21. The Houthis adhere to the Zaydi sect of Shi'ite Islam, and despite Yemen's tradition of religious tolerance, their advance has alarmed many Sunnis, some of whom have allied with AQAP. In a blow to US counter-terrorism operations, Washington said on Saturday it had evacuated its remaining personnel, including about 100 special operations forces, because of the deteriorating security situation. With both Hadi and the Houthis indulging in chest-beating propaganda and staking rival claims to be the rightful rulers, the stage now appears set for a military test of strength. Both have support in the factionalized military. In the past week the Houthis, backed by troops loyal to former president Ali Abdullah Saleh, have advanced on Hadi's forces in the south and clashed with tribes in central provinces. Fighting has focused on gaining strategic positions and air bases but analysts fear the consequences should Saudi Arabia and Iran join in more openly. "So far in the crisis there has not been that tipping point towards war, partly because there has been no external backer to provide enough munitions," said Fernando Carvajal of the Institute of Arab and Islamic Studies at Britain's Exeter University, warning of the risks of more outside involvement. External help could prove decisive. Hadi's control of Aden's sea and air ports would allow his Gulf Arab allies to supply his now meager military forces with ease. Houthi control of the Red Sea port of Hodeida and the onset of direct Tehran-Sanaa flights last month means Iran could offer its allies similar assistance. [caption id="attachment_10608" align="alignnone" width="500"] Southern People's Resistance militants loyal to Yemen's President Abd-Rabbu Mansour Hadi gather at the al-Anad air base in the country's southern province of Lahej, after seizing it March 22, 2015[/caption] RESISTANCE For now the Houthis and Saleh, a critic of Hadi, appear to hold the upper hand, but this may not last. Their forces, reckoned by analysts to represent around two thirds of the old Yemeni army, face three main enemies: units loyal to Hadi in Aden, Sunni tribes in Marib province and tribes fighting alongside AQAP in al-Bayda province. "The Houthis and Saleh might be able to win the initial battle but they'll lose the war, because they will be faced with a lot of resistance. They're already drowning in Bayda," said Nadwa Dawsari, a researcher on Yemen's tribes. Much of the past week's fighting has been over air power. Hadi built a power base in the air force when in Sanaa, replacing its commander and purging officers seen as disloyal. But last week the Houthis installed a new air force chief and unidentified jets bombed Hadi's Aden residence. Hadi's men then seized Aden's airport and radar station at al-Anad airbase. More immediate ground fighting may come in Marib, a big prize because of its oil facilities, where 12 people were killed on Saturday in clashes between the Houthis and Sunni tribes. Another fear of Arab and Western states is that either the Houthis or Sunni jihadi groups may gain the space to threaten regional energy facilities and the Bab al-Mandeb shipping route, a vital energy gateway for Europe, Asia and the United States. - Reuters