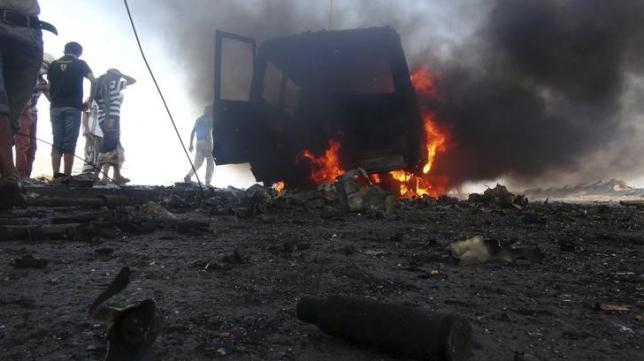 ADEN - Saudi-led air forces struck a convoy of Yemeni Houthi fighters advancing on Aden from the east on Saturday, residents said, and the Saudi navy evacuated diplomats from the southern port city. The Iranian-allied Shi'ite Muslim Houthi fighters, seeking to overthrow the Western- and Saudi-allied President Abd-Rabbu Mansour Hadi, have continued to make gains since the Saudi-led coalition launched air strikes against them early on Thursday. On Friday, the Houthis and allied army units gained their first foothold on Yemen's Arabian Sea coast by seizing the port of Shaqra, 100km (60 miles) east of Aden, allowing them to open a new front to march on the south's main city. Residents said a Houthi convoy of armoured vehicles, tanks and military trucks heading along the coastal road to Aden from Shaqra was targeted by warplanes from the Saudi-led coalition before dawn on Saturday, and a number of vehicles were hit. There was no immediate comment from the Houthis, and no details on any casualties were available. Aden residents said the convoy had been stopped, but the Houthis were sending reinforcements to Shaqra and the advance along the main al-Mukalla-Aden road was expected to resume. With the prospect looming that Hadi could lose his last refuge in Yemen, Saudi Arabia's navy evacuated dozens of diplomats from the city, Saudi state television reported. It said the foreign envoys had been safely shipped to Saudi Arabia's Red Sea port of Jeddah. Hadi left Aden on Thursday and was in the Egyptian resort of Sharm El-Sheikh to attend an Arab League summit, which he hoped would build support for the air campaign against the Houthis. In the capital Sanaa, which has been under Houthi control since September, warplanes carried out a third night of strikes, targeting an airport, residents and an official said. A United Nations source said more than 100 international UN staff were being evacuated and were expected to relocate to several countries including Jordan. United Nations Special envoy Jamal Benomar was due to join UN Secretary-General Ban Ki-moon at the Arab summit, the source added. Saudi Arabia's King Salman told the summit the operation would continue until Yemen achieved peace and security. And Kuwait's emir, Sheikh Sabah al-Ahmad al-Sabah, said the Houthi advances "pose a threat to our security". REGIONAL STRUGGLE Saudi-led forces launched the air strikes on Thursday as Houthi forces closed in on Aden and appeared poised to capture it. The air strikes bolstered local militias defending the city but have not blunted the offensive completely. Riyadh's military intervention is the latest front in a growing regional contest for power with Iran that is also playing out in Syria, where Tehran backs Bashar al-Assad's government against mainly Sunni rebels, and Iraq, where Iranian-backed Shi'ite militias are playing a major role in fighting. Sunni monarchies in the Gulf are backing Hadi and his fellow Sunnis in southern Yemen against the Shi'ite advance. Alaeddin Boroujerdi, the head of the Iranian parliament's national security and foreign policy committee, added to the sense of confrontation, saying: "Saudi Arabia is too small to be able to threaten Iran." "We utterly condemn Saudi Arabia's attack on Yemen and it will end in failure," he was quoted as saying by the semi-official Tasnim news agency on Saturday. In a week of intense fighting, the Houthis have taken the Red Sea port of al-Mukha to Aden's northwest, and the city's northern outskirts. Their entry into Shaqra means they control most land routes to Aden and can block tribal fighters trying to come in to reinforce Hadi's troops. The medical relief organisation Medecins Sans Frontieres said doctors at its hospital in Aden, who had received at least 250 wounded people in the last week, were struggling to cope. "On Thursday alone, we received 87 injured. It was tragic," said Hani Isleem, a manager at the hospital. "We were working in difficult conditions and all the time ducking out heads so that we were not hit by the shooting we were constantly hearing outside." –Reuters