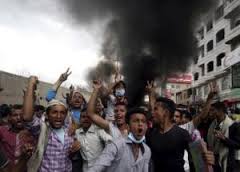 DUBAI - Yemeni Foreign Minister Riyadh Yaseen called on Monday for Gulf Arab military intervention to halt advances by Houthi fighters, a move that could draw neighboring states into the country's deepening power struggle. The Sunni Muslim monarchies of the Gulf back President Abd-Rabbu Mansour Hadi, whose forces have recently suffered reverses at the hands of Iranian-backed Houthis approaching his base in the southern port of Aden from the north. "We are requesting an intervention by the Gulf Shield forces to stop this Iranian-backed Houthi expansion," Yaseen told the newspaper al-Sharq al-Awsat, referring to a military force of the six-nation Gulf Cooperation Council (GCC). "We have expressed to the GCC, the United Nations as well as the international community that there should be a no-fly zone, and the use of military aircraft should be prevented at the airports controlled by the Houthis." The Houthis, who share a Shi'ite Muslim ideology with Iran, seized the capital Sanaa in September, a blow to the state which widened splits in the army. The group initially shared power with Hadi but dissolved parliament last month. Saudi Arabia and its Arab neighbors view their takeover as a coup and believe Iran is trying to build up its power in the region by backing armed proxies. Speaking in Riyadh, Saudi Foreign Minister Saud al-Faisal warned that Iran was trying "to sow sectarian strife" in the region and said Gulf Arab states would take steps to back Hadi. "If this issue is not solved peacefully, we will take the necessary measures to protect the region from their aggression," he told a news conference. CLASHES AND PROTESTS Houthi fighters clashed with armed opponents in south and central Yemen on Monday, residents and the Houthis said. An array of tribesmen, militiamen and army units loyal to Hadi are resisting the southward advance of the Houthis, in skirmishes that have escalated since the weekend. Houthi guerrillas backed by allied army units fought gun battles against tribesmen in Taiz province, residents said. On its official Twitter account, the Houthis said their forces had repelled an attack by "terrorist partisans and mercenaries". Militiamen and soldiers loyal to Hadi have built up a security belt on the approaches to Aden in recent days, placing tanks and artillery on mountaintops overlooking the frontlines with the Houthis. Fighting also broke out between Houthi forces and tribal militiamen in the central provinces of al-Bayda and Mareb, killing at least 15 from both sides, local officials said. The Houthi seizure on Sunday of Taiz city, Yemen's third largest, shocked opponents of the group there. Hundreds of activists have set up a protest camp by a main army base loyal to Houthis in the city center, and soldiers there opened fire on demonstrators and injured several, activists said. - Reuters