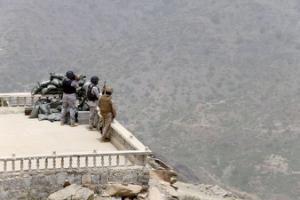 ADEN - Southern Yemeni militias backed by warplanes from a Saudi-led coalition attacked Houthi fighters across several provinces in south Yemen on Monday, driving the Shi'ite rebel forces from some of their positions, witnesses and militia sources said. The southern fighters' gains came on the 12th day of an air campaign by Saudi Arabia and mainly Gulf Arab allies trying to stem advances by the Iran-allied Houthis, who control the capital Sanaa and have advanced on the southern city of Aden. The fighting has killed hundreds of people, cut off water and electricity supplies and led theUnited Nations children's agency UNICEF to warn that Yemen is heading towards a humanitarian disaster. Saudi Arabia, the main Sunni Arab power in the Gulf, launched the air campaign on March 26 to try to contain the Shi'ite Houthis and restore President Abd-Rabbu Mansour Hadi, who has fled Aden for refuge in Riyadh. The International Committee of the Red Cross and UNICEF plan to fly aid planes intoYemen on Tuesday, but the missions have been delayed as they seek clearance from Arab states waging the air strikes and hunt for planes prepared to fly to Yemen. In Aden, Houthi forces gathered at the edge of the main port area on Monday but pulled out of two residential quarters on its fringes, residents told Reuters. Around 60 people were killed in heavy fighting in the area on Sunday, they said. Explosions shook Aden's suburbs as residents reported a foreign warship shelling Houthi positions on the outskirts. Military momentum is hard to judge in a disjointed conflict playing out across hundreds of miles of mountains, deserts and coastal positions, but in the southern provinces surrounding Aden the Houthis' foes said they had made gains. Residents in Dhalea, north of Aden, said air strikes hit a local government compound on the northern edge of the town and a military base on its outskirts which were both taken over by Houthis. They said buildings were on fire and reported loud explosions. Militia fighters said coalition planes also dropped supplies - the first time they had done so outside Aden - including mortars, rocket-propelled grenades, rifles, ammunition, telecommunications equipment and night goggles. Southern militias reported cutting off two roads in Abyan province, east of Aden, leading to the port city, after clashes with the Houthis. Residents near al-Anad air base, once home to US military personnel fighting a covert drone war with al Qaeda in Yemen, said dozens of Houthi and allied fighters were withdrawing north after the site was bombed by coalition jets. HEAVY ADEN FIGHTING Saudi Arabia has taken the lead in military operations against the Houthis, backed by air forces from its Gulf allies the United Arab Emirates, Bahrain, Kuwait and Qatar. It says it also has support from Jordan, Egypt, Sudan, Morocco and Pakistan. Pakistan has yet to spell out what support it will provide, and its parliament was meeting on Monday to discuss what the defense minister said was a request from Riyadh for military aircraft, warships and soldiers. Street fighting and heavy shelling have torn through Aden for several days. The city is the last bastion of support for the Saudi-backed Hadi, though it is unclear whether the southern fighters are battling for him or for local territory. Food, water and electricity shortages have mounted throughout the country but especially in Aden, where combat has shut ports and cut land routes from the city. "How are we supposed to live without water and electricity?" pleaded Fatima, a housewife walking through the city streets with her young children. She clutched a yellow plastic jerry can, like dozens of other residents on the streets and in queues seeking water from public wells or mosque faucets after supplies at home dried up. The International Committee of the Red Cross, which for days blamed the Saudi-led coalition for delays, told Reuters on Monday that Saudi Arabia had granted permission for an aid shipment late on Saturday but problems in chartering planes would likely delay the aid's arrival until Tuesday. "We are still working on getting the plane to Sanaa. It's a bit difficult with the logistics because there are not that many companies or cargo planes willing to fly into a conflict zone," said Marie Claire Feghali, a Red Cross spokesperson. The ICRC is aiming to get 48 tonnes of medical supplies into Yemen by plane. It is also trying to get staff by boat from Djibouti to Aden, but fighting has complicated efforts. "Today fighting was taking place in Aden port so the security situation isn't getting any better," said another ICRC spokeswoman, Sitar Jabeen. At least eight people were killed in an air strike before dawn in the suburbs of the northern city of Saadah, home of the Houthi movement which spread from its mountain stronghold to take over the capital Sanaa six months ago. A Houthi spokesman said the dead included women and children. Local officials said strikes also hit air defense and coastal military units near the Red Sea port of Hodaida, and targets on the outskirts of Aden. They also hit a bridge on the road south to Aden, apparently trying to block the Houthis from sending reinforcements to their fighters in the city. The United Nations said on Thursday that more than 500 people had been killed in two weeks of fighting in Yemen, while the Red Cross has appealed for an immediate 24-hour pause in fighting to allow aid into the country. - Reuters