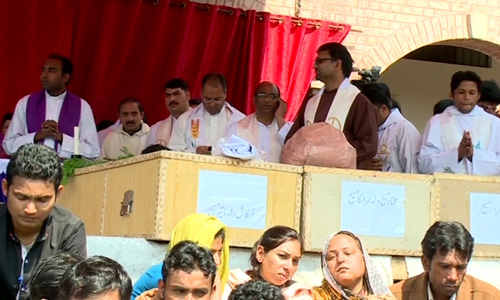 LAHORE (92 News) – The victims of the Youhanabad tragedy were laid to rest amid moving scenes and tight security in a local graveyard on Tuesday. Thousands of people attended their funeral held at St Johns Girls High School, Youhanabad. Bishop of Lahore Irfan Jamil and Catholic Archbishop Sabastian Francis Shah led the prayers for the departed souls. Moving scenes were witnessed when the victims’ bodies were brought to the school ground. After the funeral, the bodies of victims, including Danish, James, Mukhtar Masih, Akash Masih, Ilyas Bhatti, Abhaishay, Amir Masih, Musa Tanvir, Khushi Masih and Barkat Masih, were taken to a local graveyard by ambulances where they were buried. Stringent security arrangements had been made on the occasion. All the entry and exit points of Youhanabad were sealed. Ferozepure Road was blocked from Chungi Amar Sidhu to Kahna, which was opened after the victims’ burial. The Rangers and police jawans had been deployed in all the streets of the area.