Fazl should become under his guidance in politics: Bilawal 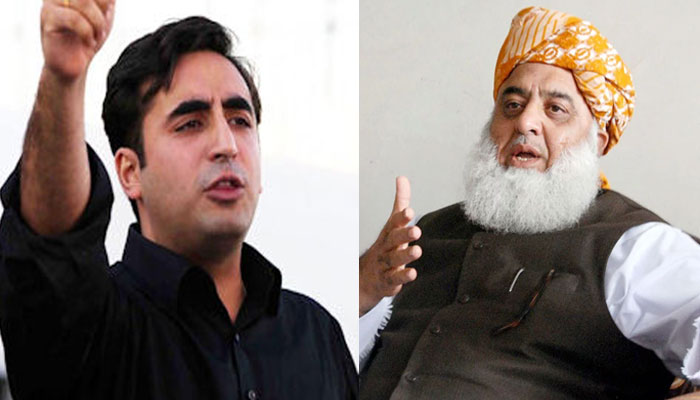 Fazl should become under his guidance in politics: Bilawal

LARKANA (92 News) – Responding of JUI-F chief Fazalur Rehman advice, Pakistan Peoples’ Party (PPP) Chairman Bilawal Bhutto Zardari on Monday said that he was respecting the JUI-F chief but in politics, he should become under his guidance. It is pertinent to mention here that Fazlur Rehman said that said PPP co-chairman Zardari should put Bilawal in his mentorship. During a meeting with women, responding to the JUI-F leader, Bilawal stated that he respects the former MNA and since he is young and possess modern thinking, it would be better for the country if he comes under his guidance instead. He further stated that while he wants to make women financially independent, he also wants to make them politically independent. Bilawal warned that Benazir Support Program was a national program and present government was trying to get the advantage of the program by replacing its name, however, he would not allow anyone to change its name. Moreover, he said that the problems of Sindh are not the responsibility of a single entity but everyone should work to solve the issues of the province adding that the developmental budget should be expended upon the thoughts of the inhabitants. “Through BIS program the women are getting strong economically and PPP will make them strong politically as well and he will pave the way for women to take part in local bodies polls,” he said. During the ceremony, Bilawal distributed interest-free loans to the women hailed from Larkana and Qambar Shahadat Kot. On the other hand, the PPP chairman could not stop tears from his eyes while talking about his mother late Benzir Bhutto. https://www.youtube.com/watch?v=GCXCmTN17sU

Will scuffle with Fazl if he tries to make Bilawal his disciple: Rasheed

Minister for Railways Sheikh Rasheed warned the JUI-F chief, saying that he will scuffle with Fazlur Rehman if he tried to make Bilawal Bhutto his disciple. He also expressed his desire to make the PPP chairman as his student in politics. He also claimed that former prime minister Nawaz Sharif only worried about to reach at Park Lane. He further claimed that the real conflict persisted between Maryam Nawaz, daughter of Nawaz Sharif, and Opposition Leader in National Assembly Shehbaz Sharif.