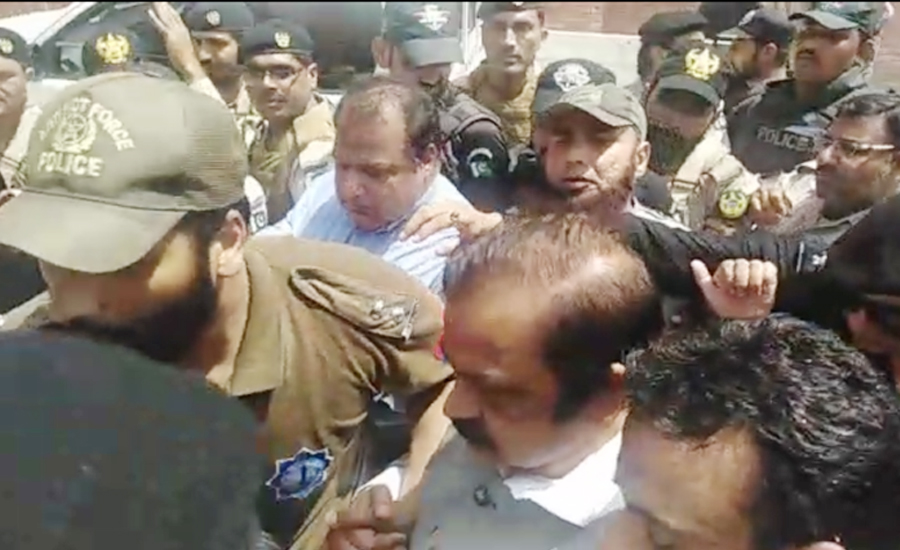 LAHORE (92 News) – The judicial magistrate’s court on Tuesday sent Pakistan Muslim League-N (PML-N) leader Rana Sanaullah to jail on 14-day judicial remand. The Anti-Narcotics Force (ANF) had presented the former Punjab law minister before judicial magistrate Ahmad Waqas in Lahore. The ANF and other prosecutors were present in the court where security was beefed up and heavy contingents of police were deployed. The court sent Rana Sanaullah to the Camp Jail, Lahore on 14 day remand. “This is injustice,” Rana Sanaullah said when the journalists asked about the arrest. “An unjust government will not be able to last long.” PML-N party workers in large numbers had gathered outside the court. Meanwhile, all unrelated persons were barred from entering the Zila Kutchehry as the authorities had installed barbed wires. https://www.youtube.com/watch?v=WCrKAXYjGCM It is pertinent to mention here that the ANF Lahore arrested Rana Sanaullah near Sukheke after the discovery of a large stash of contraband in his vehicle. According to the reports, a security plan has been devised for Sanaullah’s court appearance, with more than 400 anti-riot force deployed around the city. The containers were placed on the routes towards court for avoiding any untoward situation. On the other hand, the police raided on his house and many were taken into custody. After his arrest, he has been shifted to ANF Cantonment Office for interrogation. His medical examination was conducted in the ANF custody. ANF Commander Brig Khalid Mahmood supervised the arrest. 92 News had aired the news first of all, proving itself as informed and reliable. Sources said that Rana Sanaullah had left Faisalabad for Lahore at 1pm and the contact with him was made last time near Sukheke. “A huge quantity of contrabands was also recovered from the vehicle of Rana Sanaullah. Its quantity could be up to 15kg,” they said. They added that Rana Sanaullah faces a situation like Hanif Abbasi. However, no contact could be made with him as his cell number is off. Rana Sanaullah also faced the charges of financially helping the banned organizations. In addition, he also faces the charge of having links with criminals. He faces the charge of patronizing drug peddlers. He was also considered to be the main accused in the Model Town tragedy. Meanwhile, Rawalpindi ANF Headquarters has confirmed the arrest of Rana Sanaullah. PML-N president Shehbaz Sharif has strongly condemned the arrest of the PML-N leader. “The arrest of Rana Sanauallah without any case is the worst example of lawlessness and political revenge. Another nefarious example of using institutions on the orders of the prime minster has been set,” he said.